The Beauty and the Terror: The Italian Renaissance and the Rise of the West 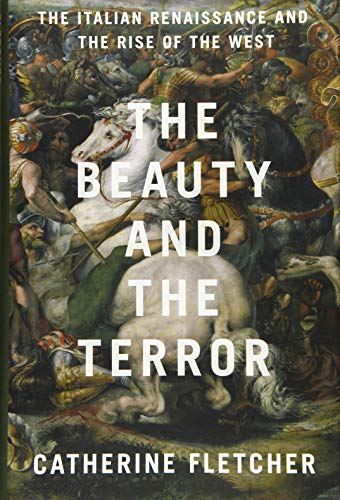 “Fletcher tells a familiar tale of cultural genius, global exploration, religious conflict and reform, and geopolitical rivalry. It was the time of Michelangelo, Leonardo da Vinci, Raphael, and Machiavelli; Columbus, Vespucci, and Cabot; Borgia and Medici Popes and Martin Luther; and geopolitical struggles between France, Spain, and the Ottoman Empire.”

Historians divide the past into epochs, ages, or periods in an effort to make history more understandable and “neat.” Such “periods” were usually not evident to the people who lived through them. Historians of the European Renaissance usually locate it during the late 15th through most of the 16th century. The word renaissance means rebirth and signifies a cultural reawakening among European peoples led by artists, inventors, scholars, and political leaders on the Italian peninsula.

At that time, the Italian peninsula was home to relatively small states, including Venice, Florence, Naples, Milan, and the Papal States. (Italian unification did not come until 1861). The Renaissance, historian Catherine Fletcher writes, was a “period of remarkable turbulence” for the states and people of the Italian peninsula. There was much creativity, but also war, political intrigue, and terror. Fletcher’s new history of the period is appropriately titled The Beauty and the Terror.

Fletcher teaches history at Swansea University in the UK, and has held fellowships in London, Florence, and Rome. Her stated goal in the book is to help us better understand “the ways in which then as now brilliant cultural innovation can exist alongside—indeed, is often intertwined with—all manner of atrocity.” Her real goal, however, is to undermine the very notion of Western civilization. More about that later.

Fletcher tells a familiar tale of cultural genius, global exploration, religious conflict and reform, and geopolitical rivalry. It was the time of Michelangelo, Leonardo da Vinci, Raphael, and Machiavelli; Columbus, Vespucci, and Cabot; Borgia and Medici Popes and Martin Luther; and geopolitical struggles between France, Spain, and the Ottoman Empire.

France and Spain between 1492 and 1559 fought for control of the Italian peninsula. The Italian states, meanwhile, shifted alliances with the larger European powers and fought among themselves for power, influence, and wealth. Political and familial factions within each Italian state also vied for power. Simultaneously, Christian Europe sought to contain the expansionist Ottoman Empire, culminating in the famous naval battle at Lepanto in 1571.

Wars produced inventions, including the improvement and more widespread use of firearms. Fletcher notes that at Gardone Val Trompia near Brescia, the Beretta Company produced (and still produces) handguns. Italian states also exported firearms to other parts of Europe. Meanwhile, Machiavelli wrote The Art of War, a book on warfare still in print in the 21st century.

It was a time when Popes sought both spiritual and temporal power for themselves and their families. Corruption within the Catholic Church as well as secular politics led to the Protestant Reformation. The Vatican also engaged in censorship and persecuted Jews and Protestants.

But, as Fletcher points out, the Roman Curia also sought reform at the Lateran Council of 1512–1517 and the Council of Trent between 1545 and 1563. In 1559, Spain’s Phillip II and France’s Henri II (whose wife was the Italian Catherine de’ Medici) signed the Peace of Cateau-Cambresis that left Spain the dominant power in Italy. More than a decade later, when the Turks occupied Cyprus and threatened to dominate the Mediterranean, the Holy League of Spain, Venice, the Papacy, smaller Italian states and the Knights of Malta defeated the Ottoman fleet in the Gulf of Patraikos near Lepanto.

Lepanto, Fletcher writes, was a Catholic triumph and “a rare show of unity for the Italian states.” Lepanto produced art that celebrated the Christian victory as “a product of divine intervention,” and a Catholic feast day devoted to Mary. Fletcher calls Lepanto a “high-point for the Catholic powers of Europe,” but notes that the Ottoman military threat remained for another century.

Here Fletcher reveals what can only be called her anti-western bias. Here, she sees the Renaissance as a reflection of the worst aspects of “our own world—on issues of “gender and sexuality,” and the lack of effective “gun control.” She accuses Renaissance history of being “appropriated by the far-right,” writing that it has usually “played a more subtle, if no less pernicious role” by promoting the “mythologies of its great men reinforcing ideas about European and Christian and white superiority without ever being so vulgar as to say so outright.”

In the end, Fletcher’s book is history viewed through the “progressive” lens in which western flaws and misdeeds and atrocities overshadow Western achievements.