This Beautiful Life: A Novel 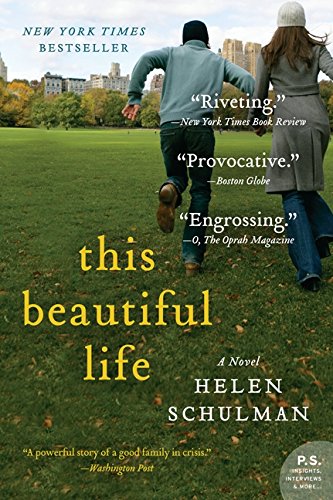 “Helen Schulman effectively portrays a birds-eye view of modern life and the fragile nature of living in our contemporary society.”

How do parents handle a crisis with their teenage son without the entire family falling apart in the process? Will the family be forever fractured or can some semblance of normalcy return?

The novel This Beautiful Life delves deeply into a very contemporary issue that is tearing families asunder in this the age of unlimited Internet access and the teen predilection for posting personal videos. When the video is of a sexual nature, then the consequences are wildly unpredictable.

In this, the ultimate age of technology, the need for immediate gratification has reached an apex. Juxtaposed with a teenager’s need for approval and to belong to a peer group, there are times when those needs override the values taught by parents. With raging hormones coupled with the desire to experiment, disasters are lurking that previously would be known only to close friends and family. In the current, frenzied public display of private missteps gone awry, very few secrets can remain hidden from the world at large.

Such is the case of the irretrievable indiscretion portrayed in This Beautiful Life, a contemporary, provocative novel that delves deeply into the psyche of a family and the permanent scars created from a momentary lapse in judgment. The result is a nightmare of seismic proportions. What began as a cohesive family that moved from Ithaca New York (a safe haven for upper class families), changed dramatically after their arrival to New York’s Upper West Side. Adapting to this strangely unfamiliar environment was more than a slight adjustment. The Bergamot family shifted both in the roles each member played, but also in their relationships to each other as well.

Liz gives up her treasured role as an art historian to become a stay-at-home mom, which is definitely a role she becomes bored with, though she adores her children. Her days are spent as a chauffeur, tour guide, and chaperone to six-year-old Coco.

Husband Richard is an ambitious and beloved economist who is determined to move forward in his career by making his mark in Manhattan. For all intents and purposes, the Bergamots lead the privileged, secure, good life within the protected environment of private schools for Coco and big brother Jake. There are sleepovers at the Plaza Hotel and luncheons and powerhouse business meetings that seem to fuel Richard’s desire to get ahead and provide well for his family. The reader intuits the strength and cohesiveness of this loving family. So what’s the problem? the reader may ask at this point in the book.

While in the midst of enjoying their secure world, an event with almost instantaneous effects occurs, igniting an explosion that wreaks havoc in the lives of every member of the Bergamot clan.

Jake attends a party at a friend’s house that combines alcohol, a group of teenagers that are his friends, and no parents in attendance to monitor their activities. Jake has been totally smitten with a girl (throughout the book) who has rejected him, so after drinking quite a bit, he flirts with another girl named Daisy. Daisy is determined to have sex with Jake, and he flirts with the idea. But he soon realizes he’s made a dreadful mistake and leaves the party to escape the whole ordeal. This could have been a simple story about teenage experimentation of sorts but the story continues to build after Jake receives a video from Daisy—in all her naked glory, doing a very sexy striptease.

Shocked and yet somewhat intrigued with the video, Jake hits the “forward” button on his email and sends it to some of his pals. As the video goes viral, so does the entire security of the Bergamot family.

From that moment on, life will never be the same again. Everyone suffers consequences of this one act. Depression spreads like the plague in what used to be “This Beautiful Life” and each family member mentally and physically escapes into their individual cocoons. Though slowly some semblance of a family is regained, the wounds left by this incident will never fully heal.

Helen Schulman effectively portrays a birds-eye view of modern life and the fragile nature of living in our contemporary society. This Beautiful Life is an accurate title comprised of a great deal of substance and forethought. Author Schulman adeptly deals with life’s decisions and consequences via thorough examination. Her characters are very realistic and each has his or her own frailties. As a result of the author’s talent for storytelling, This Beautiful Life is a fascinating read—particularly for families with teens at home.