Our Beautiful Earth: Saving Our Planet Piece by Piece 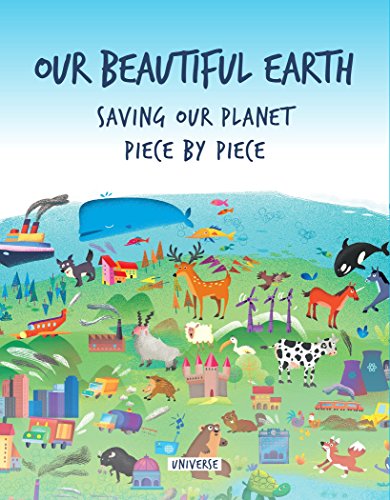 Told in the form of a letter from an imaginary planet named Globux to the inhabitants of Earth, Our Beautiful Earth: Saving Our Planet Piece by Piece is an innovative picture book that attempts to introduce young children to the concept of human-induced species extinction.

Minimal text is set against richly illustrated pages of life on Earth that are successively cut away, leaving smaller and smaller pages with fewer and fewer species. The unfortunate result of this unusual format is that the book would be more accurately subtitled Losing Our Planet Piece by Piece.

“We [human beings] have already caused so many extinctions that our dominion over the earth will appear in the fossil record like the impact of an asteroid.” —Ronald Wright; A Short History of Progress

The two authors of Our Beautiful Earth have a background in the performance arts and journalism. No scientific credentials are mentioned, and their text presents a naive and child-like view of a planet's history. Which planet they are talking about—Globux or Earth—is not clear. If the story had stuck to its original premise that it's a history of Globux, presenting the material as an instructive fable or thought provoking myth for our time and using illustrations of otherworldly life forms, it could be a workable concept.

Unfortunately, the publisher's promotion of the book states that it's about “how humans have upset the world's natural ecological balance.” Ecology is a scientific discipline, and this statement implies that it's a science book.

The book is not only poor science, it lacks clarity on every level. For example, the ending of the last several pages “. . . and a bit of Earth disappeared . . .” coupled with the device of cutting away successively larger pieces of each page is problematic for a couple of reasons.

First, the book is supposed to be a story about what happened on Globux, not Earth. The lettering is all in caps, so it's not clear whether they mean “earth” as in soil or “Earth” as in our planet, but the book's title, coupled with images that are most certainly from planet Earth and not some other fictitious place, leads to the inevitable conclusion that, though we may have started off on the planet Globux, we are now on planet Earth.

A second source of confusion is that the shrinking page sizes, coupled with successive statements that “. . . a bit of Earth disappeared . . .” gives the misleading impression that our planet is shrinking in size. What the text is actually trying to convey is that wildlife is disappearing. There's no indication that wildlife is being replaced by humans and domesticated animals, nor do the illustrations show the encroachment of farms and cities on wildlife habitat.

In Sapiens: A Brief History of Humankind author Yuval Noah Harari tells us, if we weighed the seven billion humans currently alive today, their combined weight (biomass) would be more than three times the weight of all the remaining wild animals. If we place domesticated animals onto this gargantuan weigh-scale, their weight would be more than seven times that of wild animals.

Nowhere in the text is evolution mentioned. Billions of years of life on earth are compressed into this simple sentence: “when water arrived, plants began to sprout and animals were born.” There's no sense of the passage of time between the appearance of water and the arrival of early, unfamiliar life forms that eventually evolved into the  plants and animals familiar to us today. Land plants that sprout from seeds are the result of more than two billion years of plant evolution. Mammals that give birth were preceded by an even longer evolutionary history of egg-laying antecedents. The authors have fallen into the common misconception that animals mean mammals.

On the next page “Humans arrived and helped themselves to the wonderful and abundant resources.” One can forgive inaccurate and naive language in a children's book if it captures the way children write, but an expression like “abundant resources” is adult language. Instead, “Humans arrived. They collected plants and hunted animals for food.” would not only be a more childlike use of language but would also accurately and succinctly convey our long pre-history as hunter-gatherers.

The accompanying illustrations—delightful in themselves—further undermine a text that leaves itself open to misinterpretation. There are no illustrations of early life forms, and the page that introduces humans for the first time shows plants and animals as well as humans, but also a castle, high rise buildings, factories, a nuclear power plant, oil wells, trucks, an aeroplane, a steam ship, fishing boat and many other artefacts of recent human history.

Someone should have informed the illustrators that human-caused extinctions are not a recent phenomenon. Long before civilization as we know it—at least as far back as 15,000 years ago—humans were established on every continent except Antartica, and the arrival of humans spelled extinction everywhere for the megafauna. (Only in Africa have large game animals survived in any numbers. Harari believes that anomaly can be accounted for because humans evolved in Africa, giving the megafauna sufficient time to adapt to human predation.)

Mammoths and woolly rhinos vanished from Eurasia, giant marsupials from Australia, camels, mammoths, giant bison, horses and giant sloths from the Americas. Large carnivores such as sabre-tooth cats that depended on big game vanished, too. How much more instructive and delightful it would be to see illustrations of cave men pursuing woolly mammoths on the page that depicts the arrival of humans, instead of all the accoutrements of contemporary humanity.

The text plunges immediately into present day issues such as pollution, garbage, chemical-based agriculture, and the spread of cities. There's no progression from hunter gatherer societies to agriculture to the industrial revolution, either in the narrative or the illustrations.

Once humans arrive on the scene, the illustrations could be more accurately described as a single illustration with minor variations. Apart from the obvious fact that the pages are shrinking in size, each page is nearly identical to the preceding page. That is, except for minor changes where individual elements are altered or moved about. The illustrations certainly don't live up to the promotional claim: “With simple but immediate clarity, the illustrators depict the past, present and possible future of our home world.”

Almost as an afterthought, the narrative concludes with a final message from Globux to Earth. It's as if the authors have only just remembered the original premise of the book.

Had the book been retitled Our Beautiful Planet, used images of alien species, and stuck with its original premise as a work of fiction about an imaginary planet, it would have escaped scientific scrutiny. This fictional approach might be more convincing but the design device of successively smaller pages would still have caused confusion.

Our Beautiful Earth raises some profound and difficult questions. Biodiversity is key to ecosystem stability and, hand in hand with climate change, the loss of biodiversity through mass extinction is possibly the greatest threat to our own survival.

Unfortunately the timely message of mass extinction that this book is attempting to convey is lost in a morass of confusing narrative and ill-conceived design.

In this era of fake news it's more important than ever to give our children real, not fake information to help them build a clear understanding of reality based on real scientific evidence. I wish I could commend the authors for their courageous attempt to introduce the picture book audience to this topic, but I believe this book would not only confuse very young children but distress them as well.