The Beatles through a Glass Onion: Reconsidering the White Album (Tracking Pop) 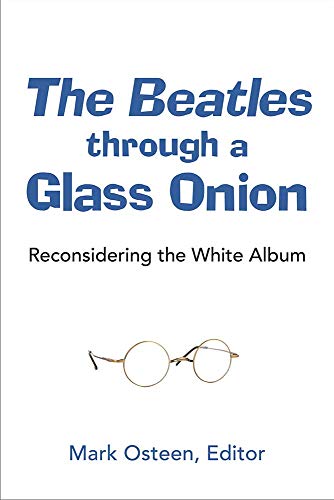 “This excellent collection of scholarly essays varies in scope and subject matter, but what ties them together is a collective appreciation and admiration for the seminal 1968 album The Beatles, more commonly known as the White Album.”

At author readings, where an audience member has carefully read the book, this lovely exchange sometimes happens. Audience member: “I love how you connected . . .” Author: “Hmm, I never quite realized I did that. But you’re absolutely right.” So much of a writer’s intentions remains mysterious, which is why a diligent reader, with the advantage of distance from the book, can find connections that the writer may not be able to quite articulate. Not always, of course. We readers bring our own biases and experiences to the pages. We tug and pull and make the work our own.

These are the kinds of issues that arise while reading The Beatles Through a Glass Onion: Reconsidering the White Album, a collection of critical essays edited by Mark Osteen. Did the Beatles intend to include all those characters, no less than 15, on the White Album? After years of intense scrutiny from fans and media, were they hiding behind these characters? Were these character songs less personal? Or more? John tended to dismiss such questions, even the quality of the work, whereas Paul has been much more forthcoming, helping to shape our interpretations of so many of the Beatles’ songs.

But again, we the readers, or listeners in this case, regardless of what John and Paul contend, make the work our own, especially with music. How dare anyone try to tell us what to think about these songs? On the other hand, knowing more about the origin of a song or about the orchestration can often enrich our listening. And that’s the primary aim of this collection.

Do we need these essays to appreciate the music? Clearly not. But regardless of your familiarity with the songs, these essays will deepen your appreciation. And it’s a pleasure to spend time with writers who have thought deeply and critically about songs that have seeped into our collective consciousness, songs that already mean something to us.

The writers in this collection are professors. And the work leans toward the academic. In the opening paragraph, Osteen suggests that Sgt. Pepper’s might call to mind Virginia Woolf, whereas the White Album might be more like a Henry James novel. Even if you’ve never read Woolf or James, the comparison suggests that the work of the Beatles is literature—which, if you’re a fan, is pretty damn satisfying. While you won’t find an opinionated, contentious Lester Bangs-type critic here, the writing, with a few rare exceptions, is consistently engaging and often vibrant. If you’ve ever wanted to take a Beatles class, this is an excellent place to start.

The subjects covered in the book range from psychedelia (“The effects of and the alterations of perspective initiated by LSD experiences are not limited to the period of the trip itself.”) to the Beatles’ effect on youth culture (“The Beatles became the world’s most visible and influential hippies.”) to their developing musicality, especially in India, where most of the songs on the White Album were roughed out (“The 1968 trip to Rishikesh provided Lennon with an adept tutor in Donovan as well as the requisite practice time.”).

There are entire chapters devoted to each Beatle. “Lennon’s compositions, at their best, demonstrate a creative mind cleverly pushing its musical limits within the construct of a return to his musical roots.” Paul on this album “looks to the future . . . He anticipates heavy metal with the raucous guitar-riff-driven sound of ‘Helter Skelter,’” as well as more personal songs by artists such as James Taylor and Carole King.

This excellent collection of scholarly essays varies in scope and subject matter, but what ties them together is a collective appreciation and admiration for the seminal 1968 album The Beatles, more commonly known as the White Album.