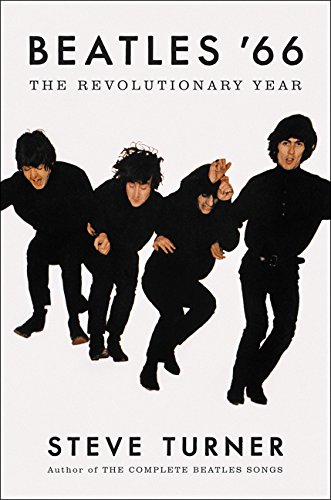 Generally, books about the Beatles can be divided into two groups, either the all-encompassing history of the band (Tune In by Mark Lewisohn is of course the best example but far from the only one) or books that take on just a slice of the Beatles career or post-career (Man on the Run: Paul McCartney in the 1970s by Tom Doyle comes to mind).

Beatles ’66: The Revolutionary Year by Steve Turner is the quintessential slice of life Beatles book. The legend of the Beatles is so grand that the band pretty much has its own center of gravity so taking these bite-sized nuggets seems the more satisfying endeavor.

Turner, who lived through the Beatles years, certainly picked the right 12 months to examine and examine it he does in the kind of microscopic detail that any Beatles fan will eat up. We are there for every scrap of inspiration, quip, and love affair Turner can get his hands on. It’s an astonishing good piece of investigative journalism to have interviewed the Beatles contemporaries and then put their recollections forward in a cohesive fashion.

We are there when John “put his head in hands and began weeping in front of [Brian] Epstein, [Tony] Barrow, and photographer Harry Benson” as he prepares to address the press on his self-created controversy about the band being more popular than Jesus.

But it’s why John was crying that’s so telling. According to Turner, “It upset him that something he had said could make his best friends Paul, George and Ringo vulnerable to an attack.” The Beatles, for all their differences, had many similarities (they were all, after all, Northern men) and had each other’s backs.

The year 1966 was when the boys stopped touring for many reasons but also because they feared someone might take a shot at them.

In the course of this fateful year, the Beatles themselves felt that they went from being boys to men. They stopped performing, they expanded their songs to areas no pop stars had ever dared, they recorded and released ground-breaking Revolver and began work on the album that would top all other albums, Sgt. Pepper. Even the beards and facial hair they began to grow was a signal to the outside world that the four lads were growing up.

It does not go unnoted that this is also the year John met Yoko and Brian Epstein began his fateful slide into depression, two events that eventually killed the band.

Turner does a masterful job showing how the Beatles grew as a band and as individuals and how the atmosphere of Swinging London contributed to their growth. When they stopped touring, these four young men suddenly had a lot of time of their hands, despite their enormous creative output. They no longer were cooped up in hotel rooms and recording studios, as had been the case from 1962 to 1966.

They were free to roam London and beyond, and they did. Although they had very different interests, which we’re all familiar with, they soaked up what they needed and brought the best bits back to the studio and their music. And as Turner points out, their notoriety allowed them to see everything first and to gain entrée into the most exclusive rooms. Paul and George seemed the most open to exploration while John’s journey seemed more interior, but the three of them were uber-curious.

In an interview in 1974 that opens the book, John likens the baby boomer generation to being a ship out to discover a new world “and the Beatles were in the crow’s nest of that ship.” They were able to see far ahead and let their contemporaries know what was coming and they guided them there in surprising ways.

You can’t help but being impressed by how hard John, Paul, George, and Ringo drove themselves to do different things, to never take the easy way, to experiment with different instruments. It was a creative period, and the Beatles were in the creative center of the universe through the music, art and plays of their contemporaries. They were challenged by all of it and they came to play.

This book guides Beatles fans through that year in an engaging, interesting and compelling way. Beatles ’66 is a major achievement—for Beatles fans, yes of course, but also for anyone interested in how creativity works and is affected by its surroundings.