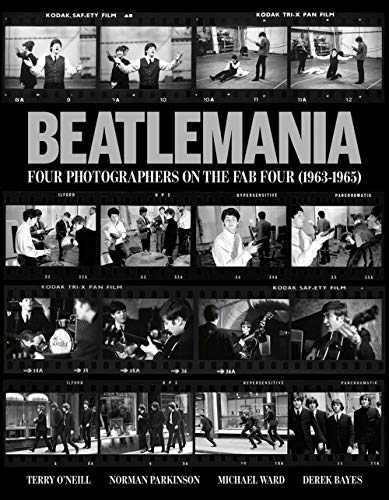 “The Beatles’ legend only grows in stature every year until now it is one of the best-known stories in entertainment history. Anything that remotely touches them is gold.”

The early photographs of The Beatles, when they still were so very young and immensely enjoying all that attention, is the subject of this attractive photo book. Peeling through page after page of the black and white photos is like seeing a dragonfly captured in amber. The photographs are so close and so revealing that you feel as though you are in the recording studio with them.

There are many small moments that capture your attention. How incredibly slim Paul was on the day the band recorded “She Loves You.” How thick was the hair of Ringo and George when they were running around London as they shot their second film Help. How disengaged John was on one of their very first photo shoots as he chats up the “birds” who always followed the band.

There are four separate sections of the book, each devoted to one of the four photographs. Michael Ward was 34 years old, a decade older than any of the boys, when he was given the assignment to photograph the band members up in their home city of Liverpool. It was February 19, 1963, and the temperature was barely above zero.

Ward didn’t know what to do with them, so they gave him a little tour of their city. Ward snapped them as they horsed around monuments and streets. The photos are uninspiring other than the fact that these are The Beatles we’re looking at. Ward had the band all to himself and, while the daytime shots were nothing to write home about, the night turned into something special when Ward followed them into the Cavern Club.

Ward didn’t bring a light with him, so he pushed the speed of his film and got some wonderful shots of the band rehearsing and playing a gig. You can feel the grime of the club which was notoriously claustrophobic and sweaty.

The next photographer whose work is highlighted is Terry O’Neill whose editor heard that The Beatles were working in EMI Studio 2 and told O’Neill to go there to see what he could get. It all sounds so simple in the days before publicists, and it seemed that it was easy as showing up at the door.

O’Neill crossed paths with the boys on July 2, 1963. By then, they were huge in England, and he caught them in the studio on the day they recorded a single that would become one of the biggest selling singles of all time—“She Loves You.”

Just like Ward before him, O’Neill at first didn’t know quite how to pose the boys. He took them into the alley with their guitars, but he had a problem with Ringo who couldn’t drag his drum kit along with him. Instead, O’Neill decided that Ringo should hold up a cymbal and his drumsticks for one of the lamest shots of The Beatles ever.

It was only inside the studio that magic struck as John, Paul, George, and Ringo picked up their instruments for real and recorded “She Loves You.” The boys were still under the spell of manager Brian Epstein and recorded the single and its B side “I’ll Get You” in shirts and ties, all buttoned up.

When Norman Parkinson caught up with the group, it was September 12, 1963, when they were recording their second album. Parkinson was by then a well-known photographer and brought his 18-year-old son to the session. Again, he caught the band as they ran through a bunch of songs and, like a good dad, managed to sneak his son into one of them.

The last set of photos in the book were never before published and were taken by photographer Derek Bayes. He was at his magazine office on Sunday May 9, 1965, when he heard a commotion in the street. Most of London’s stores were closed back then and, when Bayes headed downstairs, he found The Beatles walking around getting ready to shoot a scene for their movie Help.

Again, one can’t help but think of the serendipitous nature of the day. Instead of going through an army of handlers and publicists, Bayes simply went downstairs and began shooting the boys as they ran through some scenes. He put the negatives aside, always intending to publish them but never getting around to it. At last, they’ve found a home.

After breezing through the photographs in this book, one has to question whether the photographers were all that good or whether they were simply lucky and happened to be in the right place at the right time. Most of the photos, to be honest, are not that memorable as photographs. They become memorable because of their subjects.

The Beatles’ legend only grows in stature every year until now it is one of the best-known stories in entertainment history. Anything that remotely touches them is gold. The magic of this collection is that the photographers managed to be there at the beginning of that legend. The photos are raw, some out of focus, most not staged but they are great because of the subject matter. If they’d been photographing the band The Animals on these days, the photos would still be in someone’s drawer.