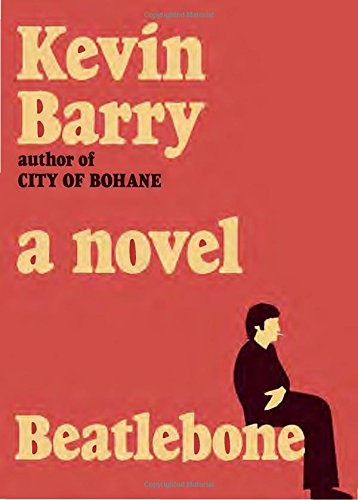 It’s 1978 and John Lennon has taken off from everyone and everything he knows to find peace in his soul and songs in his psyche. He’s looking for the creative juices that he’s suddenly lost and, to find them, he goes to an island he owns off the west coast of Ireland.

That’s the premise of this novel by critically acclaimed Irish writer Kevin Barry.

This fictional account of John’s search for solace is filled with lyrical prose, insights into John Lennon’s psyche, and cynical but spot on back-and-forth dialogue between John and his nemesis/driver/therapist Cornelius O’Grady.

The homespun wisdom of O’Grady is endless as John learns after he tells the Irishman that he’s afraid. “Look we are all terrified John. There is no mystery to it. If you weren’t terrified, there would be something wrong with you. . . . It’s all a gamble. We have no control. We have no hope. We haven’t a prayer against any of it. So throw back the shoulders. Comb the hair. Polish the shoes. Never let a plain girl pass by without compliment. Keep the eyes straight and sober-looking in the sockets of your head. Look out at the world hard and face the fucker down. And listen at all times, John. Do listen to what’s around you.”

As beautifully written as Beatlebone is, it’s possible some readers might pick it up expecting something very different entirely. It’s not the story of an ex-Beatle as much as it is an examination of a successful but mentally exhausted artist.

This account feels real, no doubt because John is such a well-known public figure. There are several aspects to the story that are real. John did in fact own Dorinish Island near Achill Island along the wild west coast of Ireland. He considered using it as an escape from the world but eventually turned it over to a group of hippies.

The Beatlebone of the title is the fictional album John supposedly came up with while on this retreat. It was to feature nine songs because of John’s fascination with the number nine but, as we see in a later chapter, John came up with nothing on this journey that made sense to anyone but him.

Given all that, it’s not too much to imagine, as Kevin Barry does so well, that John might have gone to the island to get away from the world—and Yoko and even his infant son—to find himself. The parts of the book where John is bantering with local driver and wit Cornelius O’Grady and other townspeople are terrific.

Less terrific is a section where the author inserts himself and explains what gave him the idea for the book. It’s a very strange and off-putting section and seems out of place.

On many levels, Beatlebone is a triumph of language and storytelling, but if you pick it up, be prepared for something out of the ordinary. If that works for you, you’ll love it. If not, you’ll be as bewildered as John’s fictional record producer is in the novel as he tries to make songs out of nonsense.