Beasts of the Earth 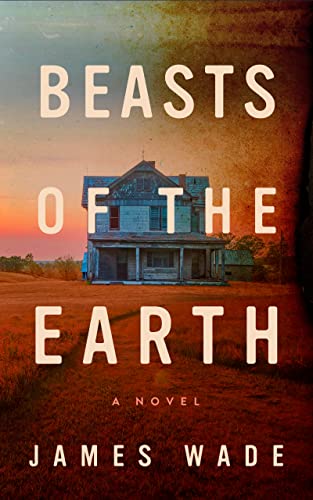 “Wade’s pitch-perfect, personality-driven dialogue sings in the voice of life, and his ability to meld existential thought, situational metaphor, and cinematic setting is a full-bodied experience . . .”

We know from the start LeBlanc is wounded, that his limping spirit is tantamount to the spare, prison-like furnishings of the low-ceilinged duplex he’s rented on the shanty side of town for the past 20 years, that his economic speech has little to do with still waters running deep, that it’s born of a wariness from what he’s hiding.

It is the economic downturn of 1987 in Coral County, Texas, where thirty-something Harlan LeBlanc works alongside the small crew of  Carter Hills High School’s Grounds and Maintenance Department, and partakes of a cursory friendship with a troubled, young co-worker named Gene Thomas. A man of habit gripping to a rote, daily schedule, LeBlanc tends the high school’s football field with each step carefully taken, in a manner telling of his mind frame. “LeBlanc reveled in such undertakings—the opportunity to create boundaries, to ensure the proper area for the rules to be applied. There was an element of control, an upholding of justice, that brought peace to his mind.”

It is 1965 in the bayou of Assumption Parrish, Louisiana, and 13-year-old Michael Fischer’s hardscrabble world grows harder when his regionally shunned, depraved criminal father is released from prison. “A boy should be happy when his father returns, but Michael was not happy. He had memories of Munday—memories distorted by time and hearsay—and though there existed still a longing for the comfort and protection of a father, dread guided the boy.” Used to being the man of the house for his morbidly obese mother and younger sister, Michael is in fear when his hard-drinking father is home, and only breathes easy when he habitually disappears.

After home circumstances take an unspeakable, dark turn at the hands of his father, Michael flees to the woods, where he’s met with more danger still, until he’s found by a dying recluse of a poet named Remus, who takes the injured Michael to his cabin, and begins the long road to repairing the traumatized, now displaced, youth.

Over time, the strangers warm to an alliance, and Michael “played at having a father, and Remus played at being one. But the past is not a thing to sit still, and there are no new beginnings. The world itself was begun only once. And since that beginning its every rotation has depended on the one before—each circumstance born from the last.”

Cassie Harper has broken Gene Thomas’s heart. A student at Carter Hills High, there is more to her than meets the eye. When Cassie is found murdered on school grounds, it rocks the entire community. When circumstantial evidence comes to include Gene Thomas, it strikes LeBlanc too close to home, casting aspersions on his character, and giving rise to his secret, haunted past.

Author James Wade treads a tight wire between Beasts of the Earth’s dual storylines. He deftly keeps the reader guessing about common ground throughout the tumult of the three-part story. The tone is shadowy and off-kilter, with elements of gothic-tinged realism vested upon an innocent heart, and a mind in peril of becoming unhinged.

There is much to keep the reader invested. Wade’s pitch-perfect, personality-driven dialogue sings in the voice of life, and his ability to meld existential thought, situational metaphor, and cinematic setting is a full-bodied experience: As Harlan LeBlanc sets out to right a wrong from the past, “He walked along the river in the morning light and watched it widen and grow as it approached Port Neches and then on to the Gulf of Mexico, and he wondered if the river might hold itself or some piece of itself out there in all that ocean—might cling at some molecular level to whatever made it a river in the first place, salt or no salt. But he knew the answer and knew the difficulty in fighting back against an ever-growing tide.”

Beasts of the Earth satisfies the discerning reader. Its balanced, oscillating chapters are played out in riveting complete scenes that take you deeper into the gritty backstory of Harlan LeBlanc, a man you care about, and somehow understand from what he's not saying, while the town around him holds him in suspicion and his moral compass covertly guides him to truth and justice sought at a personal cost.

A soul-deep exploration of a wounded man in crisis, James Wade’s Beasts of the Earth follows his two widely acclaimed novels, All Things Left Wild, and River, Sing Out, and secures his position as an author of extraordinary merit.