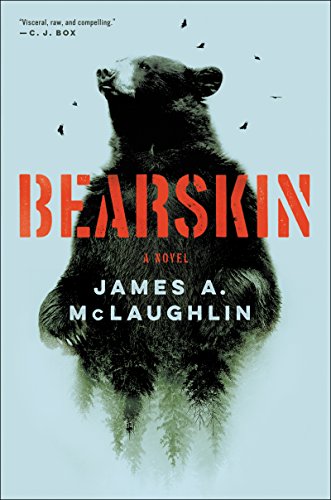 For those of us living in the Appalachian corridor, the American black bear is seldom an animal to pay much heed. Unlike its grizzled, western cousins, the black bear does not swat king salmon from mid-leap with hubcap sized paws. It does not drive elk herds to their doom across a stark, majestic tundra. It will never be heard to devour naïve hippies in a Herzog film. The black bear, nose to the ground as it trundles, is a consummate snuffer of acorns—and tipper of garbage cans. Like raccoons, black bears have grown bold and numerous on the excess of human society. They are, in a word, common.

They are also the totemic figure of James A. McLaughlin’s woodsy thriller, Bearskin. In a species of prose which might well embellish razors or bourbon, the story follows Rice Moore, a 30-something biology student who’s taken a caretaker position at a nature reserve in order to hide from Mexican drug traffickers.

In a series of italicized flashbacks, we learn how Rice fell in league with Apryl, a fellow researcher using her border expeditions as cover for a risky, but lucrative, stint as DEA liaison to the Sinaloa cartel. When things go predictably mierda, Rice is thrown in a Mexican prison, and Apryl is raped (more on this later) and killed by a bloodthirsty young sicario (as well as this.) Upon his release, Rice avenges his girlfriend a la Dirty Harry, and flees the southwest.

Back in the present, and now going by Rick Morton, Rice is licking his wounds on several hundred acres of pristine Virginia wilderness. As a character, he has little interiority, but here we sometimes get to see what he sees, and fleetingly grasp at who he might be:

“. . . the bear stood stunned by the headlights, his split ear twitching, nostrils dilating, eyes two bright green coins against the black hump of his body, a thousand bees orbiting his head like electrons.”

These pastoral musings can be ponderous, but are occasionally lovely—a needed juxtaposition to the violence and social antagonism Rice finds in his new home.

After a mysterious hillbilly reveals that bears are being poached on the mountain, Rice takes it upon himself to intervene, fearing that police involvement will give away his location to the cartel. He interviews several unfriendly locals, who seem to unanimously loath the very concept of nature (again, we’ll revisit) and even poses as a bear poacher, attempting to sell some counterfeit gall bladders to a black-market buyer (“bear galls,” Rice learns, are a secret ingredient in Chinese medicine, because why not besmirch the Chinese, while we’re here?)

This country-noir portion of the story culminates in a nighttime forest ambush replete with crossbows, which finally exposes Rice to local law enforcement and makes him a murder suspect to boot. The plot points come quick and poison-tipped from there out, further complicated by our hero’s involvement with Sara, the former caretaker, who left the reserve after being brutally beaten and (you guessed it) raped.

Listen: Bearskin is a thriller, and as such, perhaps it must maintain a stronger allegiance to story than to philosophy. One should not begrudge a novel its genre, especially a novel as fast-paced and evocative as this. It’s a genuine page-turner, and to create such a clockwork head-trip is no small feat.

But Bearskin is also a novel that skims the frothy surface of our current cultural moment without ever wondering what’s fermenting below. In a time when white nationalism taints every headline, it gives us Mexicans as a collective, tattooed cartoon in snakeskin boots, seeking only to import drugs, murder, and sexual violence.

Similarly, in the wake of J. D. Vance’s Hillbilly Elegy and a thousand brow-beating op-eds, Bearskin avoids portraying rural Appalachians as anything but lizard-brained rednecks, easily scapegoated for the decline of an ecosystem or the (dear god, again) rape of a beautiful woman. It is perhaps this novel’s use—this word is key—of women which is most, well, galling. Whether it’s the sexy bad girl of Rice’s past life, or the nurturing, literal “girl next door” of his present, the female characters of Bearskin function principally as objects to be violated, killed, and avenged later in almost embarrassingly sadistic detail (shoving a sharpened stick through a good ol’ boy’s eardrum, to give a pointed example.) The only exceptions are Rice’s out-of-town boss, who appears briefly via telephone, and Suzy, a police officer who exists to inform us that Rice looks something “like that actor, Viggo Mortensen,” and who, we are assured, is “buxom.”

Of course, it’s not every novel’s job to take up arms in the battle for better representation. Books are entertainment products, and their worth must—for better or worse—be judged on their ability to hold our attention, and take our money. It’s not a crime to hinge one’s plot upon those things—drugs, foreigners, the sanctity of the universal vagina—which are most stigmatized for one’s projected readership. It’s just, in a word, common.

For readers who find all this analysis a bit too pedantic for the subject at hand, let’s leave on the following praise: Just as a black bear is still a bear, Bearskin is still a very adept thriller. There are times, as the expansive quiet of Blue Ridge greenery lulls you, that it emerges from some darker place, a creature of undeniable power. Your face grows hot, the minutes blur, a static force-field binds your limbs. When it passes, you feel somehow lucky. You’ve encountered something feral, and dangerous, and it was fun.