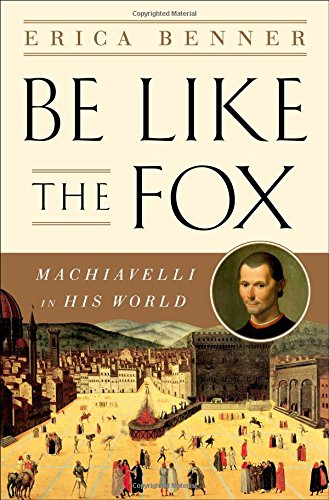 In his 1943 classic, The Machiavellians, the political philosopher James Burnham praised Niccolo Machiavelli for writing truthfully and unsentimentally about the way political leaders gain and use power.

Burnham examined Machiavelli’s major writings, including The Prince, The Art of War, History of Florence, and especially Discourses on Livy, and found in them “an intense and dominant passion for the truth.” “No prejudice, no weighty tradition, no authority, no emotional twist,” Burnham wrote, “is enough to lead [Machiavelli] to temper his inquiry into the truth.”

Burnham also depicted Machiavelli as a champion of freedom and liberty. Erica Benner, in her latest book on Machiavelli, Be Like a Fox, takes a similar unconventional view of the great Florentine writer and politician.

This is Benner’s third book on Machiavelli, and her focus here is on his consistent efforts as both a writer and government official to promote republicanism and independence for Florence in the midst of political rivalry among the Italian city-states and great power rivalry in Europe.

Florence in the early 16th century was rocked by domestic insurrection, civil war, and foreign aggression. France, the Holy Roman Empire, the Papal States, and the Medici family were among the key actors affecting Florence’s politics and destiny.

Benner notes that Machiavelli was first and foremost a patriot who was “devoted to the salvation of . . . Florence and . . . Italy.” He sought to strengthen Florence and ultimately unify Italy to ensure liberty and independence for its citizens.

Machiavelli at times served as a military administrator for Florence. He oversaw military reorganization and reform with the goal of forming a well-trained and devoted civilian militia.

He understood, Benner writes, that “military reforms need to go hand in hand with social and political ones.” Florence needed a strong army to maintain its independence. Machiavelli once wrote, “[T]he foundations of any state are arms and justice.” This experience informed his views in The Art of War.

He also served Florence as a diplomat, meeting and negotiating with French and Spanish leaders, officials of other Italian principalities, and the Vatican. Benner gleans from Machiavelli’s writings, especially his Discourse on Pisa, “a philosophy of peacemaking.”

Machiavelli’s advice to Florence’s leaders included: “Do not take what you cannot hold;” “peace is faithful where men are willingly pacified;” “victories are never secure without justice;” “[do not] lose the opportunity of having a certain good through hoping to have an uncertain better;” and “the duty of a prudent man is constantly to consider what may harm him and to foresee problems in the distance.”

“Machiavellian” has become a synonym for ruthless, amoral, and deceptive political practices. To be sure, some of his writings—especially The Prince—provide ammunition for his detractors. But contrary to this conventional view, Machiavelli demonstrated “a steely determination to change the corrupt world he lived in.” He “never stopped trying to form a republic,” Benner writes, “that had better chances of lasting and thriving than the one he had served.”

Benner wherever possible uses Machiavelli’s own words—letters, diaries, poems, and books—to tell this story. She admits, however, to transgressing the usual “biographical conventions” by reconstructing dialogues based on letters and diaries that mention accounts of conversations. She also admits to occasionally condensing or paraphrasing original sources.

Benner, like Burnham before her, believes that Machiavelli’s works “carry warning lessons for all times.” “[Machiavelli] treats history,” she writes, “as a medicine used to purge its readers of arrogance, naivety about human nature, and the fatalistic belief that the course of human affairs cannot be regulated by our intelligence, but has to be left to nature or to God.”