The BBC: A Century on Air 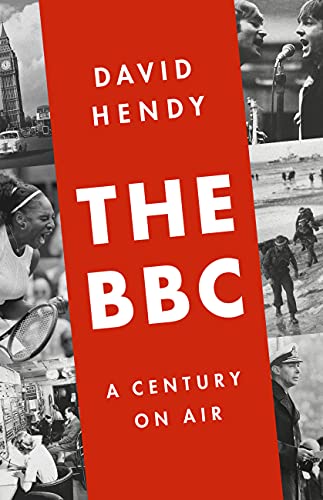 “With bright thumbnails on key figures and entertaining vignettes on memorable moments, The BBC sheds considerable light on the history of a leading broadcaster.”

Americans can be forgiven for not quite understanding the British Broadcasting Corporation (BBC), that radio and television behemoth that brings us everything from Doctor Who to the funeral of Diana, Princess of Wales, and other state occasions, and exemplifies everything British, but is not run by the British government.

David Hendy, a former BBC producer and professor of media and communication at the University of Sussex, makes a valiant stab at explaining the enormous broadcasting network, and even he found the problem of selection “almost unbelievable.” In The BBC, which runs to nearly 600 pages, he examines its people, programs, and impact over the past century.

He notes the broadcaster has a “quasi-mystical place” in Britain’s national psyche.

Based on oral histories and archival research, much of the book is a lively account of the network’s efforts to “inform, educate and entertain” the public—from “the palace to the humblest cottage”—during years of prosperity, warfare, and political upheavals.

With emphasis on the men and women behind the broadcasts to more than 200 countries, Hendy’s history from below offers vivid glimpses of the BBC during World War II (the longest section, covering morale-building during the Blitz and the sending of coded messages to bolster the resistance in occupied countries) and of efforts to balance cultural and mass-entertainment programing to help foster “a common culture.”

The network began as a radio company in 1922, founded by three men: Cecil Lewis, a British fighter pilot in World War I, who served as a writer, producer, and director; John Reith, the BBC’s first director general, who declared “it is better to overestimate the mentality of the public than to underestimate it”; and Arthur Burrowes, a journalist known as “Uncle Arthur” for his early radio broadcasts.

“We didn’t know what we were doing,” said Lewis, “we were simply finding something which could be broadcast.” Early fare included sketches and skits from variety shows, book readings, musical recitals, and lectures.

From its start, the network existed by Royal Charter, and was not government-run, with funding by a licensing fee set by Parliament.

Hendy makes clear BBC programming has been much criticized over the years, from outside and within. One early BBC director complained there was “too much education, too many lectures . . . too many uninteresting items, such as Elizabethan music, groaning Chamber music quite unappreciated by the public, readings from unknown poets,” and so on.

Balancing rarified programming with sports and other matters of broad appeal has always been a goal, writes the author. From early on, it was felt that featuring entertainment alone would have been “an insult to the character and intelligence of the people.”

By the 1930s, the BBC was “helping to create a shared public life.” Each night, millions of people heard the chimes of Big Ben at the start of the evening news.

The BBC is especially good on the early years. In time, the network sprawled. There were many innovations, including the rise of television in the 1950s, as well as controversies over news coverage, over programs like The Black and White Minstrel Show (running for two decades until 1978, with performers in black face), and over failure to represent minority communities.

Then, too, there were frequent political pressures, depending on which party was in power in Britain. Hendy shows how the BBC has succeeded—and sometimes failed—to meet challenges. Cuts in licensing fees have been a headache in recent years.

Now and again Hendy devotes a lengthy section to programming content, perhaps not often enough. He details David Attenborough’s debut on BBC Television with Zoo Quest, and his enormous subsequent success with Life on Earth and other shows. Many readers will wish there were more such program stories and fewer about the byzantine bureaucracy.

Even so, Hendy has taken a deep and informative core reading of the BBC’s first 100 years. With bright thumbnails on key figures and entertaining vignettes on memorable moments, The BBC sheds considerable light on the history of a leading broadcaster.