The Bazaar of Bad Dreams: Stories 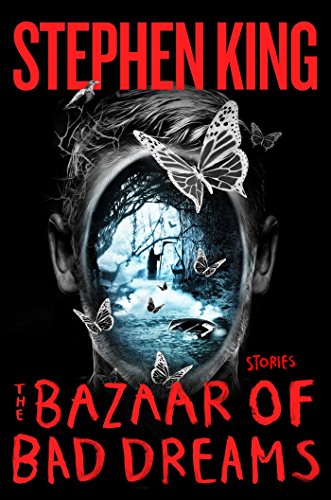 While Stephen King is most well known for his long list of amazing novels, he has also over the years released some incredible short story collections. The Bazaar of Bad Dreams may not contain shorts as memorable as some of his others, but it does give avid, and casual, Stephen King fans some great and juicy bits to chew before the next main course King novel comes out.

From classic King-esque stories like “Afterlife,” “Bad Little Kid,” “Obits,” and “That Bus Is Another World,” to some not so King stories like “Batman and Robin Have an Altercation,” Drunken Fireworks,” and “Herman Wouk Is Still Alive,” right into a story like “Ur” which pulls directly from King’s overarching mythos that infects all his novels, this collection has a tale for all tastes whether they be horror, scifi, crime, literary, or even comedy.

Regardless of the actual stories, this collection connects the reader with many of Stephen King’s long time themes of morality, guilt, revenge, correcting past mistakes, and the afterlife. From the mess that is made of a marriage when a lucrative proposition is put before a couple to the murder of a child that only one man can see as pure evil, The Bazaar of Bad Dreams covers the gamut of human emotions and what drives us all.

Dealing with one’s own mortality and what comes next are all variations of the same theme that ties many of the stories together. While King himself does say some of the stories had their origins years and years ago when he was much younger, it is not hard to see how an aging storyteller and master of the craft deals with the looming inevitability of death that we all must face at some point. Dementia, assisted care, disease, self-destruction, loss of a soul mate—all are woven throughout the collection, giving the book a constant feel that perhaps the Grim Reaper, Mr. Death himself, is lurking just over the reader’s shoulder, waiting for that last page to be turned so the scythe can be swung and the lights put out forever.

But what sets this collection apart from the others in King’s immense body of work is that the first few stories don’t feel so King-esque at all. They feel like warmups, exercises in word play, pieces that King wanted to toy with and explore before diving into more comfortable waters. Not to say they are not brilliant in their own right, but rabid King fans will feel the difference. It isn’t until about a third of the way through The Bazaar of Bad Dreams that the Stephen King everyone knows and loves/fears shows up and that familiar cadence and patois begins to show up on the pages.

The highlight of the book is not just the fiction, but King’s introductions to each story. An explanation of the kernel of an idea, the historical context of a character, the pure business reasons for writing, or the desire to pay homage to writers that came before, King explains the whys and hows of many of the stories, adding depth and insight into what could have just been a plain collection of short stories. Not that anything King writes is plain.

Highly recommended for fans of King’s work as well as fans of the writing process, The Bazaar of Bad Dreams is a solid short story collection that deserves to be on any bookshelf. From quick reads to involved narratives, this collection has the right size and subject matter for most anyone who loves genre fiction.