The Bayou Trilogy: Under the Bright Lights, Muscle for the Wing, and The Ones You Do 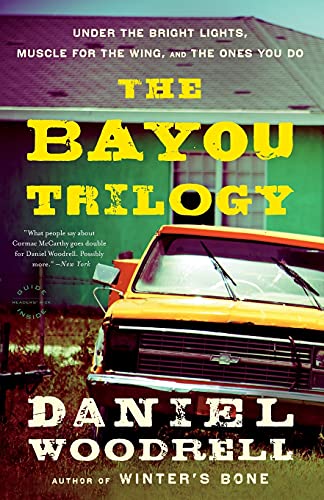 Well, the name to that jealously guarded secret is Daniel Woodrell, the quiet giant of crime stories. Finally brought together in one muscular tome, this trinity of novels gives us some of Mr. Woodrell’s finest work, and is aptly titled The Bayou Trilogy, consisting of Under the Bright Lights, Muscle for the Wing, and the classic The Ones You Do.

All the books feature Detective Rene Shade, an ex-boxer turned cop in the Saint Bruno police force. Shade’s family has strong ties to the community. One brother, Francois, is an attorney while the other, Tip, is on the opposite side of the coin, owning a somewhat dubious and extremely seedy bar frequented by the type of criminals Rene usually tries to put behind other type of bars. Rene’s mother, the formidable Ma Blanqui, operates a pool hall, above where the detective resides. His father, John X Shade, is a ‘no show’, having abandoned the family a long time ago to pursue his two true loves: gambling and pool hustling.

Under The Bright Lights takes its telling title from a Joe Frazier quote: “You can map out a fight plan or a life plan, but when the action starts, it may not go the way you planned, and you're down to your reflexes—that means your [preparation:]. That's where your roadwork shows. If you cheated on that in the dark of the morning, well, you’re going to get found out now, under the bright lights.”

In Under The Bright Lights, when a city councilman is gunned down, Rene Shade is assigned to investigate the murder of a local politician. Within moments of surveying the crime scene in the victim’s home, Shade knows that this was a premeditated kill and not a burglary gone wrong, the conclusion the Mayor wants drawn.

Shade refuses to write it off as a burglary-homicide as ordered, and goes on a quest for the truth on a chilling chase, while desperately dodging his own unresolved past.

Muscle for the Wing tells the story of ex-con Emil Jaddick and his killing crew named The Wing: “The first thing Emil Jaddick shoved through the country-club door was double barreled and loaded. The first thing he said to the poker players inside was – ‘Do I have your attention? We’re robbin’ you assholes. Any objections?”’

Jaddick has big plans of wrestling control of Saint Bruno’s less-than-legal action. He also has no mercy when it comes to implementing those plans. Only one thing can stop him. A cop who plays by the same ruthless rules, and that cop’s name is Rene Shade.

The Ones You Do: “It’s like dyin’ old men all over the world will tell you—when you get aged and rackety and think back across your entire lifespan, why it ain’t the ones you do, you regret, its the ones you don’t,” states one of the characters in the story.

In this, the third book, Woodrell reunites the three Shade brothers with their degenerate father, John X. and even though it may be called a Rene Shade book, the story is essentially that of John X.’s life.

John X. returns to Saint Bruno, where he reviews his checkered past. Hot on his trial is vengeful sociopath, Lunch Pumphrey, planning to recover $47,000 stolen from him by John X.’s young wife, who has fled to Europe to launch a singing career, leaving their young daughter, Etta, in her father’s care.

Be prepared to fall instantly in love with the years-ahead-of her-time Etta as we witness her getting John X. his first hard drink in the morning, and serving snacks and beers at his card games.

Though villainous Lunch is the instrument of John X.’s downfall, his real conflict is with his own declining history, the people he ruined and the family he neglected.
Has John X. any regrets for the things he has done in his past? Perhaps this classic statement to his son, Tip, will answer that. “It may be that all I ever did with my life was to the bad, but, damn, son, I sure would like to do it all again.”

There is something poetic and hauntingly telling in The Bayou Trilogy: a dark world of small-time criminals with big-time ideas, cops walking the very thin and gray line of justice and criminality, and broken people seeking pieces they will, perhaps, never find, each discovering their own form of survival and whatever-it-takes attitude.