The Battle Over Health Care: What Obama's Reform Means for America's Future 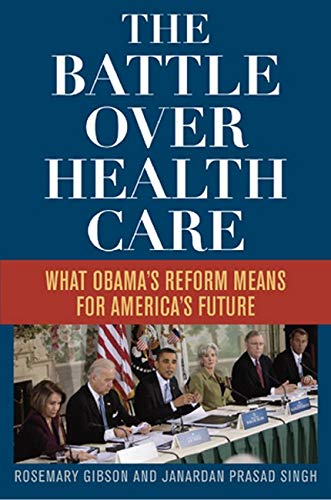 “gripping . . . find out how American taxpayers, insurance premium payers, and patients are literally getting mistreated. . . . No one is spared.”

From the first chapter of this gripping review of the current United States health system comes this quote: “Goodbye public option which would be less expensive than private insurance because it would not include marketing costs, high insurance executive salaries, and profit making.”

The Battle Over Health Care also reviews how the 2010 national reforms will impact health care delivery. That line more or less tells you that this is a “balls to the wall” political analysis of the entire health care system. Bravo to authors Gibson and Singh who have managed to discuss complexity and keep it simple enough to remain engaging. Who should read this book—everyone. Read it to find out how American taxpayers, insurance premium payers, and patients are literally getting mistreated.

According to the authors, the drug industry is now the largest defrauder of the government (do you feel those boney fingers in your pockets) besting the defense industry in terms of fines and penalties. And amazingly, when drug companies encourage unapproved use of their pharmaceuticals to increase profits, and which often result in patient death, no criminal sentences are given, only civil penalties.

Lest you decide the book is too depressing, there are a few diamonds in the rough, which may be worth mining for U.S. health care patients and insurance purchasers. All consumers should become informed about the Health Insurance Rate Authority Act, which was created in 2010, to increase transparency in how the money you pay to your insurance company is actually used.

Authors Gibson and Singh also expose how the American Medical Association (AMA) has damaged its reputation through disservice to all primary care clinicians through its support of clinical payments which don’t reward patient wellness or primary care to the same extent as specialist care.

Ms. Gibson and Mr. Singh flatly state that health care is unaffordable in the United States, because it is designed to be, in order for medical device manufacturers, drug companies, and hospitals to earn money for their shareholders. One could make the case that shareholder reward trumps patient safety, as the scary examples cited in this book affirm.

Science fiction noteworthy are the patients who actually catch fire during surgery because of an alcohol based treatment to kill germs prior to the procedure, which ignites from sparks from the surgical equipment (saws) and apparently there are dozens of deaths like this every year. The medical supply product, which was many times higher in flammable alcohol content was substituted not for patient safety, but to increase sales for the supplier, i.e., more is better. Not for fire safety, but I bet the douchebag met his sales quota for the year.

Why Hospitals Don’t Stop Harming Patients is another of the attention getting chapters, and is a must read for anyone who isn’t convinced that the country has a hospital safety problem.

It is estimated that 10% of all of the deaths in the United States are due to hospital errors. Some examples cited include; 14,500 deaths from radiation exposure due to excessive CT scans, 100,000 deaths from hospital acquired infections, not to mention equipment malfunctions in the operating room, and medication errors.

Authors Singh and Gibson indicate the United States lacks a tracking system to record patient deaths from preventable harm, unlike the cancer or AIDS registry. In addition to the veil of secrecy, when medical errors are made, the health care system just keeps on billing; however, Minnesota hospitals were singled out for its innovative changes to address medical errors, which included the following process: acknowledging the error, apologizing, offering free ongoing medical care, and offering a financial settlement, all without court intervention.

Amazing what happens when you tell the truth and take accountability. Imagine how better off we all would be if bankers had done that about unsustainable housing loans.

No one is spared from this clean analysis of the U.S. health care morass and that makes it a fair nonpartisan review of an important national resource. This tome is best illustrated with this quote by Dr. Donald Berwick, “The reason we have a malpractice problem is because there is so much medical malpractice.”

Berwick is none other than the administrator of the Center for Medicare and Medicaid Services has been candid about the extent of poor quality health care in the country.

Payment for health services in the United States is based on volume and encourages the creation of more services just to gain money, without a commensurate increase in national health. Consequently, hospitals look for doctors who are “good producers” and perform a lot of procedures, which means surgery, lab work, and other profitable items.

Though this problem cannot all be laid at the altar of health care profit making, because the lack of coordinated care also creates this misallocation of resources. There is little incentive to encourage low-tech methods for improving patient health, like a change in diet and exercise versus more drastic measures.

Gibson and Singh rightly claim that there is a fundamental imbalance in national health care priorities, which includes AMA lobbying, medical school training, and financial incentives that do not reinforce the importance of primary health care, but rather the treatment of critically ill patients.

The Battle Over Health Care reveals how some of the most aggressive companies are the nonprofits, disguised as charitable organizations, religious affiliation notwithstanding.

But nobody can beat Senator Harkin from Iowa who describes the 2010 health care reforms this way, “It’s not like the Ten Commandments, chiseled in stone. It’s more like a starter home—suitable for improvement.” And that is exactly what The Battle Over Health Care reveals for the 2010 health care reforms—which is good enough reason to read this book.