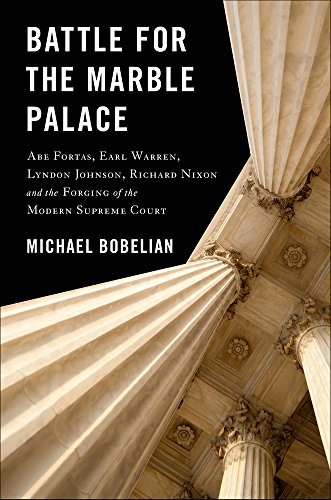 “Battle for the Marble Palace, Michael Bobelian’s superbly written and brilliantly contextualized history of Lyndon Johnson’s failed nomination of his close friend and confidant, Abe Fortas, for Chief Justice of the United States Supreme Court in 1968, bears almost inestimable importance and relevance to our own time.”

Battle for the Marble Palace, Michael Bobelian’s superbly written and brilliantly contextualized history of Lyndon Johnson’s failed nomination of his close friend and confidant, Abe Fortas, for Chief Justice of the United States Supreme Court in 1968, bears almost inestimable importance and relevance to our own time.

In part, this is because the pitched battle fought over Fortas’ nomination in the Senate essentially established the playbook not only for today’s brutal nomination showdowns, but also foreshadowed the extreme politicization of the court itself. More to the point, Bobelian’s book matters because the significance of the Fortas debacle, a half-century later, is so little understood.

The last time the Fortas affair drew much attention in the national media was September 1987, when Democrats successfully blocked Ronald Reagan’s nomination of constitutional originalist Robert Bork to the court. Numerous commentators were quick to point out the parallels at the time: a well-credentialed jurist with a staggering intellect nominated by a lame-duck second-term president attacked with unrestrained vitriol by senators “using every procedural device at their disposal,” as top LBJ domestic advisor Joseph Califano wrote in a New York Times op-ed titled “The ’68 Version of the Bork Debate.”

Today we expect Supreme Court nominations and confirmation hearings to play out as pitched ideological battles that mirror the bitter partisanship and polarization of the contemporary political landscape. Rarely will a heated confirmation hearing pass without a pundit pointing to the Bork hearings (and Ted Kennedy’s bombastic testimony in particular) as the first of the worst.

If we recall the Fortas debacle at all, it’s as a case study in presidential hubris and cronyism run rampant. The handed-down story goes something like this: A lame-duck president, elected by a historic landslide four years earlier with a mandate for an ambitious liberal agenda and the legislative genius to push it through, found himself so humiliated by cities in revolt and mounting congressional and popular opposition to his escalating war in Vietnam that he’d regretfully decided not to seek re-election. Then he took the foolhardy step of trying to promote his best friend on the Supreme Court to Chief Justice, and to nominate the congressional representative from his home district to fill his buddy’s Associate Justice seat.

In doing so, the story goes, Johnson roiled his own party and squandered the opportunity to fill two key seats on the court on two compromised nominees the Senate couldn’t possibly confirm, and effectively handed the future of the court to Republicans, via his successor Richard Nixon.

Johnson biographer Robert Dallek presents a slightly more complicated story in the few pages he devotes to the Fortas affair in Flawed Giant (1998), although he focuses mostly on the cronyism issue. In LBJ’s 1968 (2018), Kyle Longley devotes an entire chapter to the Fortas nomination but sticks almost entirely to the unsettling personal ties between Johnson and his nominees. LBJ biographer Doris Kearns Goodwin doesn’t mention the Fortas fight at all; Robert A. Caro is still writing his volume on Johnson’s 1965–68 term.

Thus, it’s been left to Bobelian to tell the full story of the failed Fortas nomination. And it’s been well worth the wait. Battle for the Marble Palace is enthralling read that reveals a story much richer and more revealing than others published to date.

In Bobelian’s telling, the Senate’s bitter attacks on Fortas in summer 1968 represented nothing less than a marshaling of the forces of reaction that would transform the Supreme Court and America’s national politics in the half-century to come.

The violent response to the Fortas nomination wasn’t really about the flagrant overreach of a president pushing the promotion of a justice to whom he was too close for comfort. Though that accusation was accurate, and though Fortas wasn’t particularly forthcoming about it in the hearings, Johnson’s purported over-the-line political intimacy with Fortas hardly would have mattered a few months later following Johnson’s retreat to his Texas ranch at the end of his term.

What’s more, as Bobelian makes clear, Johnson floated Thornberry’s prospective nomination (not even triggered until Fortas theoretically moved up into Warren’s seat), as a sop to Southern senators rather than a boost to a Hill Country protégé. Cronyism was not the issue that turned the tide in the Fortas confirmation hearings.

Rather, the hearings essentially put Associate Justice Fortas on trial for the entire leftward drift of the Supreme Court since the ascension of California governor Earl Warren to Chief Justice in 1953 under President Dwight David Eisenhower. The Republican President famously called Warren’s nomination “the biggest damn fool decision I ever made.”

Though the landmark Brown v. Board of Education (1954) case that declared school segregation and the prevailing doctrine of “separate but equal” unconstitutional quickly made the Warren court public enemy #1 in the eyes of Southern senators and most of their constituents, Brown was just the beginning.

In the decade-plus that followed, the Warren court had handed down a number of pivotal and similarly controversial decisions guaranteeing due process for criminal defendants, weakening the Smith Act that had enabled the McCarthy-era Congress to attack suspected Communists with virtual impunity, banning institutionally sanctioned prayer in public schools, and enforcing congressional reapportionment to affirm the principal of “one person, one vote.”

Earl Warren submitted his retirement to Lyndon Johnson in 1968 in the hope that Johnson choose his fill the position instead of LBJ’s likely successor Richard Nixon (whom Warren knew well and despised). Johnson then nominated Fortas, whom he had successfully placed on the court in 1965 in a quiet and routine hearing typical of that time.

Fortas’ affiliation with the Warren court was reason enough to attack him for conservative senators who held the court directly responsible for what they considered a judicially engineered social revolution. Even before the Fortas nomination was announced, as Bobelian writes, “the GOP’s southern field commander, Strom Thurmond, had vowed to the press that no matter whom Johnson picked, he would ‘emphatically’ and ‘unalterably’ oppose the selection.”

Fortas’ close association with Johnson, a Texan former Senator who had achieved the seemingly impossible—election to the presidency from a Southern state—and subsequently betrayed the region’s stalwart segregationists with the Civil Rights Act of 1964 and the Voting Rights Act of 1965, made the justice even more of a lightning rod for the stored-up bitterness of the last four years for conservatives of both parties.

Although Michigan Republican senator Robert Griffin officially led the charge against Fortas, it was the firebrand Southern senators Strom Thurmond (the first of the white supremacist Dixiecrats to see the writing on the wall and defect to the Republican party) and Democrat James Eastland who brought most of the drama to the hearings.

Furthermore, it was Lyndon Johnson’s mentor Richard Russell—the even-tempered segregationist seven-term Georgia senator for whom the Senate Office Building is named—whose conspicuous absence from the debate and failure to come to the aid of his surrogate son after years of mounting friction between them signaled the death knell of one of the most potent political alliances of the 20th century.

Anything was fair game in the Fortas hearings. As Bobelian writes, Eastland and Thurmond’s “willingness to topple the long-established norms Fortas effortlessly navigated just three years earlier transformed the confirmation process from a routine, almost casual, practice that had seen little friction in the past to a no-holds-barred brawl.”

Of course, this “no-holds-barred” and “throw it at the wall and see if it sticks” approach to scuttling a politically undesirable Supreme Court nomination seems unsurprising in the era of Mitch McConnell, the Senate Majority Leader who refused even to hold hearings for Merrick Garland when Democratic President Barack Obama nominated him ten months before the end of this second term in office in 2016. McConnell’s glib declaration that his Senate majority will fill any Supreme Court seat that might open in 2020, in the final year of Donald Trump’s term, demonstrates a Thurmond-like willingness to twist any political expedient into a principle, then blithely defy that principle when is expediency expires.

In these times in which McConnell has defined so much of our prevailing political climate, it becomes easier to understand how a Supreme Court nomination fairly mundane in its origins—a sitting U.S. president recommending one of his own judicial nominees for promotion to Chief Justice upon the current Chief’s retirement—might be wrongly remembered simply as the baldest cronyist blunder of its era because that’s the spin that stuck.

Bobelian’s argument that the explosive Fortas hearings represent less an out-of-time aberration than the first crucial step toward our current hyper-politicized court becomes even stronger as he details the battles over Supreme Court nominees that followed.

In the first three years of his presidency, Nixon worked assiduously to leverage the political opportunities the thwarted Fortas Chief Justice nomination (and Fortas’ removal from the court in 1970) gave him, including not only choosing a new chief but masterminding a ludicrously crass and baseless attempt—led by none other than future president Gerald Ford—to open an additional seat by impeaching a left-of-center sitting justice in 1970.

Bobelian chronicles the staggering extent of Nixon’s judicial scheming not only to remake the court in the image of his Southern Strategy soulmate Strom Thurmond, but to advance his incipient conversion of Dixiecrat white supremacists to Nixon loyalists by attempting to nominate two ardent (and patently unqualified) Southern segregationists to the next seat to open up on the court. Never before, Bobelian maintains, had stacking the court with ideologically partisan justices ever been regarded as a presidential selling point. By 2016, it was so central to Donald Trump’s campaign that he published a list of Federalist Society-vetted right-wing judicial candidates as potential nominees during a Trump presidency.

As Bobelian acknowledges, Nixon (like Griffin, Thurmond, and Eastland in the Fortas hearings) was winging it, testing a new strategy to reshape the court with no set playbook to follow. Fifty years later, with the Federalist Society breeding partisan attack dogs expressly for the federal courts and thus supplying the entire eligible Republican talent pool, the Thurmond-Nixon strategy for which Fortas’ 1968 defeat cleared the way hasn’t so much repopulated the Supreme Court as—for the foreseeable future—sealed its fate.