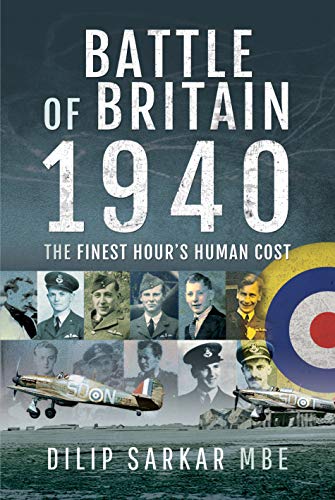 “In Battle of Britain, Dilip Sarkar tells the story of this historic moment through the experiences of participants who did not survive the battle. The author questions the established dates and argues for including others among ‘The Few,’ the lost of the battle.”

“The Battle of Britain is considered to have begun on 10 July 1940 and concluding sixteen weeks later on 31 October,” although those dates are subject to question. “German bombers continued pounding Britain by night until May 1941” and fighters clashed until the weather stopped their flying that February. Despite various German stratagems, “at no time was Fighter Command rendered ineffective.”

Of the 3,000 members of the aircrews who participated in the Battle of Britain, 544 died in that campaign, and 791 died before the war ended. Three of the dead from the battle belonged to the Women’s’ Auxiliary Air Force.

Many other persons from ground crews and support personnel to seamen to civilians sacrificed and suffered to stave off the defeat of Great Britain. A mistake by the RAF in determining German intentions, for example, allowed the Germans to bomb an engine factory in Bristol “causing 250 casualties in the factory and 107 more further afield.”

In Battle of Britain, Dilip Sarkar tells the story of this historic moment through the experiences of participants who did not survive the battle. The author questions the established dates and argues for including others among “The Few,” the lost of the battle. “What we now need to increasingly explore are the stories of the casualties.”

Sarkar selected the individuals from all of the groups of British victims of the Battle of Britain, including people on the ground. The biographies give a human face to the story of a military conflict.

At the end of the First World War, Britain “had the largest air force in the world and enjoyed technical superiority.” The 1919 Paris Peace Conference reduced the Royal Air Force to just 371 planes to cover the entire Empire, however.

Funds spent during the Great Depression on air power “focused on the bomber force,” as also in other nations. Even as the RAF expanded out of the concerns over German rearmament, the emphasis remained on long range bombers, not on fighter defense.

As war neared, the fighter branch “achieved some kind of parity with the Germans” but the Luftwaffe had the advantage of experienced combat pilots. Lives were also lost to accidents, fatigue, mechanical failure, and weather.

Biographical sketches effectively explain the details of flight training. With Bleaufighters, Blenheims, Defiants, Hurricanes, and Spitfires, the RAF could more than hold its own plane for plane, but it did not have enough pilots and planes. The RAF had the advantage of defending home ground while German aircraft had problems with range.

Britain’s inexperienced young new pilots in 65 Squadron and others risked their lives “flying many patrols responding to reports of incoming enemy aircraft, which inevitably transpired to be either friendlies or erroneous.” Even while giving the defense of Britain priority, the RAF took serious losses in the failed and largely symbolic effort at defending France.

Planes also had to defend convoys passing through the Straights of Dover, a short distance from the German planes stationed in northern France. Britain depended upon its local supply of coal but much of that some 40,000 tons per week had to reach London and Southampton “by sea, to which there was no alternative.” The Royal Navy entered the war unprepared to protect these “Coal Scuttle Brigade” convoys with their multinational mixed race crews of whom 227 of merchant seamen lost their lives in the Battle of Britain.

Sarkar’s biographical sketches cover more than just air battles. The author explains, for example, that “although social class was not always decided by money,” that the ruling elite consisted of men from families wealthy enough to send their sons to one of three expensive “public schools.” Wealth thus often defined membership in the officer/pilot class but even which of “the four Britains” where a citizen lived.

The few men for whom so many owed so much, as Winston Churchill famously described the participants of the Battle of Britain, varied in their backgrounds. Martyn Aurel King, for example, came from a family of missionaries in China. Franciszek Gruszka joined the RAF after his native Poland fell to the Germans.

The author even includes the story of Lothar Siegfried Stronk, a German pilot lost in the battle, and mentions other Luftwaffe pilots. Sarkar writes of a recovered German aircraft “that will be exhibited as a unique and poignant reminder of the young men from both sides and many nations who lost their lives during the Battle of Britain.”

Battle of Britain has illustrations, a bibliography, and an index to personal names. The author includes German sources.