Battle for the Big Top: P.T. Barnum, James Bailey, John Ringling and the Death-Defying Saga of the American Circus 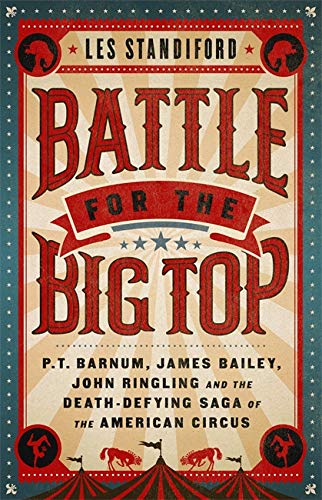 “A nicely crafted popular history, Battle for the Big Top will appeal to anyone who has ever wondered about the men who gave us the thrill of three-ring circuses.”

Anyone who remembers responding with glee to the words “The circus is in town!” will agree that the show, with its riotous live entertainment, provided “an adrenaline rush,” as the last owner of Ringling Bros. Barnum & Bailey Circus once remarked. Unfortunately, veteran author Standiford’s Battle for the Big Top, a readable and meticulous business history of that circus, fails to deliver the same excitement.

By design, the book focuses on the circus makers behind the curtain, so to speak, and details their ongoing struggles keeping the show alive—amid massive societal changes—for 146 years. Lost along the way are much of the wild appeal of the spectacle itself.

“By 1859 . . . there had come to the circus its flying trapeze artists, high-wire acts, lions and tigers, learned pigs, elephants, big tops and the possibility of three rings, equestrian majesty, clowns of Shakespearian complexity, ‘monsters,’ parades, calliope music, novel transport methods, and performance scheduling and marketing—all adding up to a form of entertainment that seized the imagination of the American public as it had never been seized before,” writes Standiford.

It was quite an evolution from the days of the Roman circus and the Greek hippodrome—recounted in detail here—with far more to come, including three rings of boisterous activity and side shows featuring every imaginable kind of human oddity.

The American circus that would eventually bill itself as “the greatest show on earth” was begun by James A. Bailey (1847–1906), an orphan born in Detroit, whose real name was James Anthony McGinnis. He “ran away with” a traveling circus. By the late 1860s he began work as an advance man, posting bills and placing advertisements in towns in the days before the show’s arrival. He also handled the circus’s travel and other arrangements.

By the 1870s, he bought his own circus and began using America’s emerging railroads as a method of transportation.

Bailey’s story takes many complex turns (true for each of the men behind the curtain), including a tour of Australia with elephants, a giraffe, a hippopotamus, and a rhinoceros. When his huge Indian elephant, Babe, gave birth in 1880, to a calf named Little Columbia—the first ever born in captivity in America—Bailey spread the news.

Standiford draws on biographies and Barnum’s own memoirs to tell the familiar story of the ambitious Connecticut grocer’s son who became famous for exhibiting Tom Thumb, Jo-Jo the Dog-Faced Boy, The Bearded Woman, and other human curiosities at his American Museum in Manhattan and in his circuses.

Barnum was undoubtedly the most colorful of the three circus owners, and the author does a fine job of describing his life and career. With the arrival of the larger-than-life Connecticut-born promoter and showman, the circus began offering simultaneous performances in three rings.

Standiford chronicles the circus’s continued growth and the successful 1907 bid for the company by business-savvy John Ringling (1866–1936) and his brothers, giving them a monopoly of the U.S. circus scene.

With both Bailey and Barnum deceased, the Ringling Brothers went on to fame and great fortune. By the 1920s they had made Sarasota, Florida, the winter home for their circus, and established themselves as prominent developers there.

As “an inextricable part of the national identity,” the circus thrived for decades under yet another new owner—Kenneth Feld, the man behind Disney on Ice and Monster Jam—in the face of new forms of diversion (from television to the internet) and the public’s changing entertainment whims. Unable to combat the challenges of dwindling attendance, animal rights protests over the use of elephants, and growing operating costs, the circus gave its final performance in May 2017 at the Nassau Coliseum.

Standiford’s book opens with that sad occasion, at which Jonathan Lee Iverson, the circus ringmaster for nearly 20 years, lamented the world’s loss of “a place of wonder.” Without the magic of elephants, it simply would not be the circus anymore.

A nicely crafted popular history, Battle for the Big Top will appeal to anyone who has ever wondered about the men who gave us the thrill of three-ring circuses.