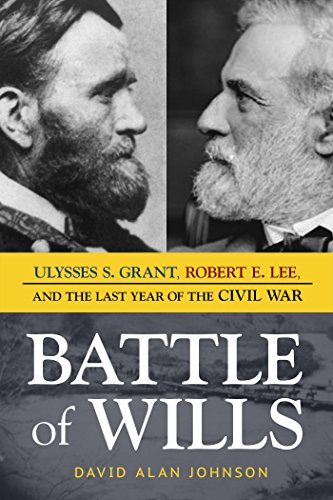 “This book is all about ideas and, in its compact narrative, does not bog down a great story with too much detail.”

The surrender of the famed Confederate Army of Northern Virginia at Appomattox on April 9, 1865, started the final collapse of the Confederate States of America, a nation and a cause that never gave up, surrendered, or completely disappeared. Robert E. Lee and Ulysses S. Grant made that event happen for all that it entailed.

Battle of Wills promotes the modern thesis that Lee for all of his deserved acclaim as a strategist also won his battles with sheer force of violence, regardless of casualties. His opponents would not make such sacrifices. Even the losses of General Ulysses S. "butcher" Grant in grinding down Lee's army were conservative and measured by comparison.

Author David Allen Johnson plays to the many ironies in his study of these leaders in the last great campaign of the Civil War. Lee, for example, famously did not remember meeting Grant during their respective services in the War with Mexico (1846–1848).

Always "spit and polish," however, then Captain Lee gave Grant a "dressing down" harsh enough that Grant never forgot it. The then lieutenant had returned from his duty in the dirty, difficult, dangerous, and necessary foraging parties.

As well remembered now, when the two officers met as commanding generals at the Appomattox many years later, the patrician Virginian Lee again was again dressed in his best. He surrendered to the middle class Midwestern Yankee Grant, bedraggled from the pursuit of the Confederate army.

Grant was haunted his whole life by such differences, what he perceived as slights. Johnson brings up these ghosts repeatedly such as the influence of the fathers on the two generals. Consequently, Battle of Wills has repetitions of the same or almost the same text in different parts of the book that is distracting.

Experiences in the War with Mexico, for example, had affected both men. Lee learned from General Winfield Scott "that outmaneuvering an enemy is a lot more effective than trying to out fight him." "These lessons would be put to very practical use by General Lee in Virginia," Johnson wrote, but Grant had studied under the same master and "would never be intimidated by him" [Lee].

From that past, Grant knew that Lee was "no magician and he was certainly no god," that his opponent was mortal. Lee owed his success in the Civil War, in part, to knowing the temperament of the generals he defeated. He never knew or could get into the minds of U. S. Grant or George Gordon Meade.

Such thought provoking writing well serves the many levels of complexity of this legendary campaign. The author uses the final act of the campaign repeatedly as a starting point to look back on and explain all of the different threads that brought these two men to Appomattox.

It does matter, as explained in this book, that for all of that, Grant still would not have won but for his advantages in sheer numbers of soldiers and supplies, another irony symbolic of the two officers' respective earlier service in Mexico. The demise of Lee's Confederate army could even be measured in the loss of its best officers.

This book is all about ideas and, in its compact narrative, does not bog down a great story with too much detail. Some of Johnson's observations are in conflict with other scholarship, and his writing is sometimes flamboyant.

Contrary to the title, the book is not really about the last year of the Civil War or, at times, this last Virginia campaign. Many other books also exist on Grant and Lee; on their great campaign; and even comparative biographies by Nancy Scott Anderson and Dwight Anderson, The Generals and by William C. Davis, Crucible of Command.