A Bat in the Belfry: A Home Repair Is Homicide Mystery 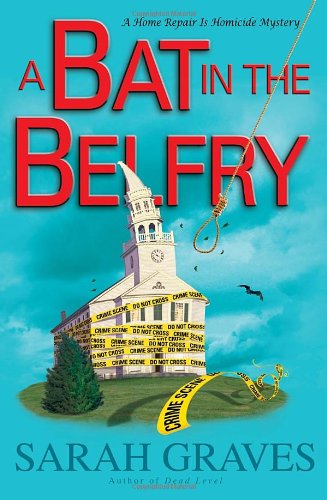 Sarah Graves’ Home Repair Is Homicide series has always had two of the three components for a great mystery: a compelling lead character and a great setting. But that third leg of a great book—plot—has been the wobbly bit. And it’s wobbly again here in A Bat in the Belfry.

Jacobia Triptree, a former money manager in NYC, took her drug-addled son and fled the rat race. She lands in Eastport, Maine. It’s so far east the Canadian island of Campobello is two miles across the water.

Now she spends her fortune fixing up her 1823 sea captain’s house in Eastport, Maine. She is aided by her best friend Ellie, a native Eastporter. Jake’s father Jacob, an ex 60s radical, Bella, her OCD housecleaner, and new mother-in-law, her husband Wade, a harbor pilot, and the now sober Sam round out the well-drawn secondary characters.

But giving the spotlight to anyone other than Jake is a mistake. In this book, it takes a long time for Jake to assume center stage, and that’s too bad, because when she does, she is the reason to keep reading.

Here Chip Hahn is a researcher for a bestselling true crime writer and has come to Eastport to spend some time with his old friend Sam. He’s deep into research for the next book, which is why his computer is full of grotesque picture and the web addresses of chat rooms filled with killers.

Chip takes a stroll one night, the same night a girl is brutally murdered, and Chip won’t provide an alibi. That along with the disturbing images on his laptop is why he is arrested.

If Ms. Graves stuck to one of her “cozy” strengths and explored how, in such a tiny place, there are so many accepted poor (both psychologically and monetarily), this would be a better story. How does no one in authority hone in on the local drug dealer and his gang that bullies everybody? Yes, they are losers, pathetic and over their heads, but that’s an okay status quo?

The victim’s dad is a drunk, and now he’s out of his mind remorseful over the death of his daughter--if only he stepped up when the daughter was alive. The police chief’s visit to the house is very well written, the filthy stench so real the reader may want to take a shower afterward. Note: Dog lovers won’t appreciate the dog being left to fend for itself in such muck.

The other elements—the Boston cop on a mission to find a long lost niece, Sam’s love life, the church steeple ready to topple—are simply superfluous.