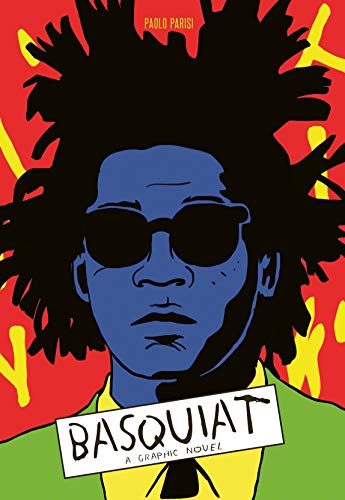 Jean-Michel Basquiat was a cryptic figure in the 1980s art scene, and he remains enigmatic 30 years after his death from an accidental overdose in 1988. Basquiat gave relatively few interviews in his career and left a fragmentary documentary record. Based on that record, Paolo Parisi has created an homage in book form. He relies on “a common thread combining jazz, art, painting and process, rhythm, rigor, improvisation, and spontaneity.” It’s a lovely idea, intimately connected to Basquiat’s own process, but the genesis isn’t always visible in the result. One wonders whether the real experience lies in the book’s creation rather than its study.

Parisi is direct about the book’s accuracy. He balances “much that is true” with “a narrative fiction that requires the betrayal of some biographical elements.” The book includes a bibliography for readers more interested in a scholarly approach. Parisi’s own approach is art representing art.

The illustrations are clearly graffiti-inspired and take influence from Basquiat’s own paintings. The classic four-color approach of comics becomes startling when rendered in red, purple, lime-yellow, and mint green. The result is a world rendered in near-negative, always distorted and disorienting. It’s an uncomfortable design for an uncomfortable subject: the art-world forces driving Basquiat’s meteoric career, his own ambition, and the ways in which he was exploited by wealthy white collectors and gallerists.

Basquiat originally worked in graffiti. In that mode, he enacted a genuinely postmodernist aesthetic. He and his friend Al Diaz created a persona, “SAMO©,” under which they left meta-graffiti around Soho in New York: “Which of these institutions has the most political influence: A TV B the church C SAMO© D McDonald’s?” The “bigger than Jesus” implication shows the scale of Basquiat’s ambition, but the nature of graffiti is anti-capitalist and anonymous, and it’s only by abandoning his chosen medium that Basquiat can realize that ambition in terms of money and fame.

Though he abandons SAMO© (which stands for “same old shit”), Basquiat almost immediately becomes trapped by the “same old shit” on which he sought to comment. Curator Diego Cortez says, “For that [show] I specifically asked Jean to prepare canvases. The time had come to see him work on a format he’d never tackled before. . . . I knew [Italian artist Sandro Chia] would invite the owners of some important galleries.”

Basquiat’s work becomes commodified. It’s no longer meaningful in itself; instead, his paintings (of which he sometimes produces more than four a day) become financial instruments, traded for the mad money in the 1980s. By 1984, Basquiat is profoundly disillusioned by the financial aspects of the art market: “I have money everywhere, everywhere. I’m paid exorbitant amounts for a single piece. . . . Working with gallery owners is exhausting. They always want more more more.”

This idea, that gallery owners exploited Basquiat, treating him as a kind of money-making force but never respecting his creativity or humanity, is the novel’s central idea. Parisi draws Basquiat in slave irons, colored purple, while a shower of green money falls around him and gallery dealers argue in increasing dollar signs. It’s perhaps the most common commentary on Basquiat’s career, part of the critical narrative suggesting that the exploitation drove him to his death.

Parisi initially reveals Basquiat as a person, a young man, a graffiti artist, interested in culture and taking control of his own fate, but in later chapters exploited Basquiat replaces that early agency. The book would benefit from a stronger narrative and character arc, focused on Basquiat’s own decisions, and perhaps commenting in a broader way on the racial and racist forces in commodity art.