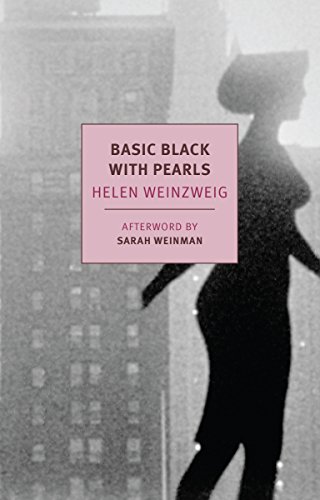 At first glance, the timing of New York Review Books Classics’ rerelease of Helen Weinzweig’s Basic Black with Pearls is almost as intriguing as the novel itself.

In the wake of record-setting women’s marches and the #MeToo movement, Weinzweig’s story of a middle-aged married woman traipsing all over Toronto in search of her lover seems a step back, an opt-out instead of a lean-in. After all, the book was published in 1980 when “MeToo” was missing the “too” and women were missing from movements in general.

But Basic Black is a sneaky and seminal work of feminist fiction, and its message about men’s maddening tendency to underestimate female fortitude and intelligence is just as relevant today as it was when it first came out. Maybe even more so.

Like the heroine’s wardrobe of choice (a no-frills black dress and a strand of pearls), the plot of Basic Black is deceptively simple: Shirley Kazenbowski, who prefers to go by her nom de plume, Lola Montez, is on a desperate search for her mysterious man-on-the-side, a chameleon named Coenraad who works for an international outfit known only as “the Agency.”

In the past, Shirley and Coenraad have found each other in the middle of teeming cities and exotic tropical landscapes courtesy of a code Coenraad devised for the purposes of their affair: he leaves hints for her in a recent issue of National Geographic, and Shirley, a junky for subtext and subterfuge, follows the titillating bread crumbs until, inevitably, she ends up in Coenraad’s manly arms.

This time, though, something has gone wrong. Instead of beckoning her to Bangkok or Belize, Coenraad has ordered Shirley home to Toronto, where, with only a pamphlet on Dutch Elm disease as her guide, she wanders the streets, more lost and disoriented than she’s ever been: “The city is mined, for me,” Shirley observes, “with the explosive devices of memory.”

Shirley’s hunt for Coenraad takes her to department stores and restaurants, through museums and in and out of the haunted scenes of her impoverished immigrant childhood, and her overactive imagination and heightened state of mind (is Coenraad in danger? Dead? Or worse, dropping her?) invests everything—an encounter in a Polish bakery, a hotel room with a busted phone, the shops of Yonge Street—with a surreal quality not unlike the sunbaked strangeness of Thomas Pynchon’s The Crying of Lot 49 and the trippier chapters of Ralph Ellison’s Invisible Man.

In this case, the invisible man is an invisible woman, made so by her age and unremarkable looks. Shirley describes herself as short and diffident, easily ignored, especially when not in the company of her dashing lover.

Coenraad, too, is inconspicuous, but not because he’s unattractive per se, but because, in his capacity at the Agency, he has become a master of disguise. It is therefore up to Shirley not only to decode his esoteric billets-doux but to recognize him on the street when chances are good he’s doing everything he can to fit in with the crowd.

And it’s not as if, when she finally spots him, she can just call out his name. Their passion requires that no one break character, that the sexual tension be not only maintained but allowed to thicken to such an extent that, when they finally find a bed, fireworks ensue. As a result, Shirley naively befriends countless men over the course of the novel, including a wino and a Mennonite botanist, thinking they might be Coenraad in camo. Spoiler alert: they’re not.

The women Shirley meets are perhaps even more significant to her journey than the men. Over and over, she encounters women whose stories of emotional imprisonment and suburban despair mimic her own.

Shirley is married to a man she doesn’t love. She has two children, but, like her literary precursor Edna Pontellier, she has decided to relinquish her role as a mother. Having escaped the shackles of mundane married life, she is now at the mercy of Coenraad, who proves as elusive as he is irresistible.

In the end, it could be said that the most important woman Shirley meets is herself, although Weinzweig smartly complicates that cozy theory by including Shirley’s history of hospitalizations and nervous breakdowns.

Through the wry mouthpiece of Shirley Kazenbowski/Lola Montez, Weinzweig has much to say about the cycle of poverty, the difficulties of immigrant life, and humanity’s seemingly endless capacity for casual cruelty. Basic Black with Pearls is a serious story about matters of love, life, death, and the constantly shifting power dynamics between men and women, but it is also genuinely entertaining.

The book’s real magic lies in its biting humor, its subtle and quick-moving plot, and in the deftness with which Weinzweig juggles characters, scenes, and conflict. Nearing its 40th birthday, Basic Black with Pearls is anything but obsolete. Rather, it is aging gracefully, adding essential complexity and depth to a debate that is clearly far from over.

Deborah E. Kennedy's debut novel, Tornado Weather, is a nominee for a 2018 Edgar Award for Best First Novel. Her stories have appeared in such venues as Third Coast magazine, Sou'wester, and North American Review. Her writing has also appeared in The Oregonian, Los Angeles Review of Books, Salon, and elsewhere.