Baseball from A to Z 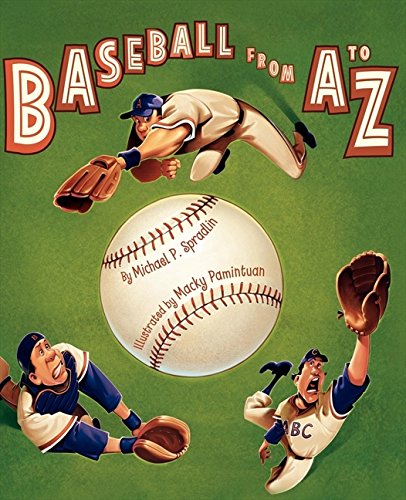 Batter up! If the kids in your life need a quick introduction to baseball, show them Baseball from A to Z. From Ace to strike Zone, this picture book presents a full line-up of baseball definitions. Author Michael Spradlin defines words such as Foul Ball, Home Run, Rookie, Tag, and Visiting Team. But he also includes wider terminology such as Jersey, Mascot, and Youth League. Some of the definitions are extremely basic. For example, B is for Ballpark.  “The ballpark is where baseball games are played.”   But he also chooses sophisticated terms. For the letter Q, he defines Quick Release. “It’s good for a catcher to have a quick release, which means he can catch and throw the ball very fast. A catcher with a quick release keeps the other team’s baserunners from stealing bases.”    Most of the time, Spradlin’s writing is clear. But not always. For example, his definition of Pitcher doesn’t mention the ball or the pitch: “The pitcher stands on the dirt mound in the middle of the infield and tries to get each batter out.” The definition of Line Drive is also vague, especially for kids who take things literally. He writes:  “A line drive is a ball hit hard on a straight line.” But the illustrations by Macky Pamintuan are outstanding. At first, the illustrations seem to be nothing more than exaggerated arms, legs, and facial expressions. But as you look at them, you’ll see that Pamintuan includes a variety of perspectives, from low on the base path to high in the stadium bleachers.  He also finds natural ways to blend alphabet letters. In the spread that shows the letters C and D, he shows a close-up of the Catcher on the left hand page and the Dugout (and the opposing team) on the right. He’s also a master at reinforcing the alphabet letters. In the picture of the Quick Release, the catcher’s mask resembles a Q. In the illustration of a Walk, he creates a W, combining the batter’s long legs with the angle of the bat. Baseball from A to Z ends on an interactive note. On the last page, the author asks kids to find more baseball words on their next trip to the ballpark. With this advice, young readers will be launched into a season of language success. Reviewer Jean L. S. Patrick is the author of several books for young people, including The Girl Who Struck Out Babe Ruth. She has written a weekly children’s book column for the Mitchell (S.D.) Daily Republic since 1989.