The Baseball: Stunts, Scandals, and Secrets Beneath the Stitches 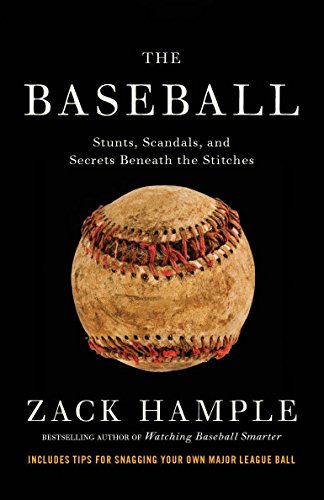 What’s red, round, and dirty when it’s brand new? Would you believe . . . a major league baseball? You might think it’s white, right? That’s just one of the things you’ll learn in this completely engaging book about the object our national pastime is named after: The Baseball: Stunts, Scandals, and Secrets Beneath the Stitches.

Mr. Hample declares his book to be “a celebration of the ball” and fans of the game, and honestly, you would be hard-pressed to disagree with that assessment.

From the outset The Baseball just feels fun. It’s intriguing, informative, and most of all flat out enjoyable. Much has been written about most every other aspect of the game, but rarely have I seen the hardball so deftly front and center as Mr. Hample places it here. The introduction dances like a fly lure that’s jerked and teased upon the water, with lots of did-you-know items tossed in—yet it has a decidedly human feel to it, almost the same unmistakable feeling one gets as you walk into your favorite stadium and see the ball field below you, yawning, grand, and welcoming.

Ever wonder what the first baseballs were made of? What about (like I did) how they’re made? As presented, the history of the ball is fascinating, from its humble beginnings to its decades long flux in composition (juice, anyone?); not only do we get to learn how to (gasp!) dismantle a ball, but we are also given an insiders tour of the Rawlings baseball factory in Costa Rica.

One of the many wonderful bits of ball-related trivia: It takes approximately 20,000 cows to provide the hides for the estimated 1.26 million baseballs used each season in the majors—go ahead, re-read that; I was amazed, too. The first thought that popped in my head when I read that was “somebody is sure to raise a stink about that.” But Mr. Hample, in his own tongue-in-cheek manner, calls this ball as it crosses right over the plate:

“Let’s get something straight: cows are not killed to make baseballs. They’re killed because people like to eat them . . .”

No painted corners there—he serves it right down Broadway.

Watch or go to any baseball game these days—minor or major league—and you’d think the teams have always given away balls, but the truth is a foul ball wasn’t always a souvenir for a lucky fan; club owners saw things differently.

Catching a foul ball during a game is an act most of us quietly hope for each time we pass through the turnstiles. One of the bonuses in this book is the ample section revealing the author’s best tips for tipping the odds of catching a ball in your favor. Even the casual fan will likely find this part interesting, and certainly useful if inclined to take up “ballhawking.”

The first half of the book is the best, with eagerly turned page after page of stories about the evolution of foul balls, anecdotes regarding publicity stunts, and two unforgettable stories recounting grimace-inducing injury and the only death in major league history. Mr. Hample delivers all of this as if he’s sitting in the seat next to you, sharing it during the passage of a few innings. I wanted more, but I suppose that plays into his marketing plan for his other book about watching the game; guess I’ll be reading that one too.

Mr. Hample captures the essence of the game, and of the book’s namesake, with the purity and enthusiasm of every little boy who ever played Little League ball. His spirit is playful and sometimes funny, but always respectful of the game he clearly holds dear.

From worn shoe leather, to horsehide, to the staggering number of Holstein hides needed to cover this venerable sphere—even the stitch patterns and their differing colors—Mr. Hample walks us, good naturedly, from yesteryear to current day, from games played with a single ball to storing them in a humidor—just about everything you can imagine in-between awaits the curious and fanatical between the covers.