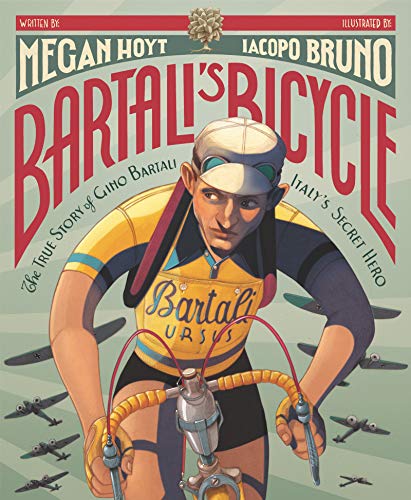 “A model of how not to write history for young people.”

Gino Bartali is definitely a hero and deserves a picture book to be written about him. This one is a decent introduction to Bartali’s daring, but has serious drawbacks, so serious no library or parent should buy it.

The first is the way quotes are treated. There are many quotes from Bartali that one assumes are actual quotes, but there is nothing in the backmatter to substantiate that. Why don’t the listed “Sources” in the backmatter refer to specific quotes? So when Bartali wins the Tour de France did he really say, “Heroes are those who have suffered. I am just a cyclist.” or is that an invention by Megan Hoyt, the author? The back cover of the book features an even more important quote: “Some medals are pinned to your soul, not to your jacket.” Again, is this an actual citation or the author’s language?

More serious, however, is the way history is glossed over, worse, distorted. Fascism and Nazism are simply “strange new ideas.” Hitler and Mussolini are never even mentioned by name. Instead, “A powerful leader said, ‘people will fall for a big lie more easily than a small one.’ Then he told a giant lie to the whole world. He said Jewish people were not really human. They must be rounded up and arrested.”

Which “powerful leader” said this? How is Italy’s alliance with fascist Germany handled? In this book, it’s ignored entirely. Tanks and soldiers march through streets, but whose tanks? Whose soldiers? Who is the “enemy” that bombs Florence? Could it be the Americans? Again, these big historical blanks are deeply disturbing, as is calling the Holocaust, the “arresting” of Jews. Hoyt has managed to make the concentration camps sound like what happened to Japanese Americans on the west coast of the United States. And calling Jews vermin and rats, a cancer on the soul of Germany and Italy,  is very different from saying they’re “not really human.”

Perhaps Hoyt thought she was making the story more palatable, but instead she shows deep insensitivity to the people who suffered, as well as a lack of historical rigor. Here is another, albeit minor, example, one that shows how untrustworthy the author is as a source. “Gino discovered that soldiers were searching for his friend Giacomo, and every available hiding place was occupied. Except one. Gino hid the Goldenberg family in his cellar.” The first problem with this passage is the “soldiers.” Which soldiers? Whose soldiers? Are Italians doing this to other Italians? And then, of course, it’s absurd to say that “every available hiding place was occupied.” Perhaps all the places Bartoli knew were taken. Or all that the Resistance was aware of. But there were many secret hiding places, many families who took the kind of risk Bartoli did. This doesn’t minimize Bartoli’s bravery. He took real risks, but this isn’t how accurate history is written.

The episode of Bartoli’s rescue of 49 English prisoners is described in such brevity, it’s impossible to know what really happened. How did he walk out with the prisoners? Did nobody ask him anything? What dangers did he—and the English—face? The reader learns that Bartoli was arrested, questioned, and released only in the timeline. But even there, who arrested Bartoli? What was he questioned about? How long was he imprisoned?

The final pages are where history gets especially short shrift.  Hoyt writes, “By 1944, people all over the world—ordinary folks of all religions, rich and poor, young and old—joined in the fight against these soldiers whose hearts were filled with hate. They, too, were rescuing Jewish families. And soon, the liar was defeated! The war was over!” People all over the world? Really? So ships full of Jewish refugees weren’t turned back to face their death in Germany? Countries opened their borders to fleeing Jewish families? This is completely invented history, an attempt to be inspiring that ends up being deeply insulting by ignoring actual history. Jewish families continued to face great hardships and the war wasn’t fought to save them. It was fought to save Europe from being devoured by Hitler. Rescuing Jews was never a goal, only an incidental achievement.

Bartoli is indeed a hero who deserves to have his story told, and the art by Jacopo Bruno is beautiful and  vivid. The text, however, serves as a model of how not to write history for young people. Trying to make a story stirring and accessible isn’t more important than historical accuracy. A good writer does both. Hoyt chooses the easy way out, avoiding the difficult historical issues so she can present a smiley face on what she calls a “true story.”