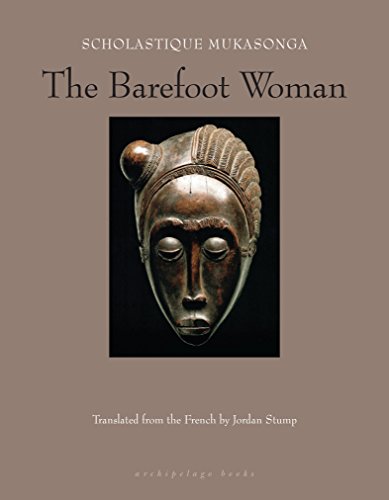 “This is an enchanting and unforgettable little book, beautifully written and translated, which brings Stefania vividly to life.”

Scholastique Mukasonga has written this small but magical book as a tribute to her mother for whom she was unable to perform the last rites as is a daughter’s duty.

“I never did cover my mother’s body with her pagne. No one was there to cover her. Maybe the murderers lingered over the corpse their machetes had dismembered. Maybe blood-drunk hyenas and dogs fed on her flesh. Her poor remains dissolved into the stench of the genocide’s monstrous mass grave, and maybe now, but this too I don’t know, maybe now she’s deep in the jumble of some ossuary, bones among bones, one skull among others.”

The Barefoot Woman is set in newly independent Rwanda under the Hutu administration installed by Belgium. Scholastique and her family are one of the many “Tutsis of Nyamata” displaced to an inhospitable region, the Bugesera, where they were expected not to survive. The book chronicles the Tutsi struggle not only to survive but to recapture some semblance of normality, seen through the words and actions of Scholastique’s supremely resourceful mother, Stefania.

Stefania’s main concern was to protect her children against the harassments of Hutu soldiers, which could occur at any moment day or night. She taught them always to be alert and insisted on dress rehearsals so that they were adept at taking cover under a bunch of dry grasses or a bramble bush. She cut a second concealed door out of their hut and ensured an arrangement of big urns and baskets provided further protection. She prepared the way through concealing packages of food in strategic places for the one sure strategy for escape that was to Burundi though she never seriously contemplated taking that course of action herself. The author did indeed escape hence this posthumous tribute.

Pursuant to all her strategies Stefania was an accomplished gatherer of intelligence in the neighborhood, ever alert to news coming from Nyamata the seat of local government, the missionaries and the market place.

In addition to her strategies of extreme survival Stefania insisted on trying to maintain the Rwanda she had known, notably in building and decorating a traditional house of woven straw with a thatched roof and back courtyard, closed by a crescent-shaped pallisade. “It was as if, thanks to her house, Stefania had regained the status and powers that Rwandan tradition ascribes to a mother . . . and, the fact is, that the soldiers generally spared Stefania’s house” perhaps fearing the spiritual charge it emitted.

Other chapters are dedicated to Stefania’s agricultural labors and attendant rituals; her medical practices including enema day “an excuse for a lively get together among the women;” her relationship with bread, a scarce resource and “almost a medicine;” her match-making activities, greatly facilitated by her detailed knowledge of everyone’s affairs, and her involvement with women’s politics in the neighborhood.

As of 2018 Rwanda was ranked in the top five countries in the world for gender equality and having met Stefania one understands why.

Though some readers will wish for more detail on the national and local political context, the fact that these are only glimpsed lends the narrative a powerful magical-realism feeling. This is an enchanting and unforgettable little book, beautifully written and translated, which brings Stefania vividly to life.