The Bards of Bone Plain 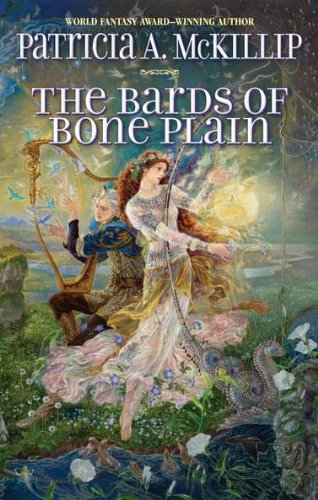 Language is magic. It allows us to communicate the intangible as well as the concrete; to relate history, invent story, and blend both into the sometimes maddening mix called legend.

Up to now, Phelan Cle’s life has been anything but legendary, and he’d be happy to keep it that way—unlike his father Jonah, who’s determined to make his son the bard he himself cannot be. Phelan, meanwhile, is planning to graduate from Bardic School with as little thesis work as possible, choosing a topic that’s been covered a thousand times before, where “all the hard work’s been done, and I won’t have to think when I write.”

His topic is Bone Plain and its mysterious standing stones, where centuries ago the infamous bard Nairn the Wanderer—the Fool, the Cursed, the Unforgiven—failed the Three Trials and was lost forever. No direct record exists of what the trials exactly were, nothing but their names.
Bard songs tell stories, but their origins lie in puzzles and riddles, which challenge the listener to answer. Some legends say there was magic, that bards could once change the world with their songs—but as the pedants at the bard school like to say these days, there are no secrets in the bardic arts. “You have all the history and poetry you need to unravel the mystery . . . the weave is there, the thread is there. Find and follow.”

Phelan’s counting on there being no secrets to discover. Then an archaeological expedition in the area turns up a curious disk with an oddly familiar profile on one side, and twig-like designs on the other, much like the patterns on the standing stones. If the designs are writing, what do they mean? And what happened to the people who used that language?

The more Phelan learns, the more certain he is that the legend of Nairn is much more than an old story. Even more maddening, events seem to be circling back, history ready to repeat itself, as the king announces a competition to choose a new royal bard, bringing musicians from across the land to out-sing, out-riddle, and out-puzzle each other. But the prize may demand much more of the winner than any seat at the king’s side.

Weaving the past and present together into a vividly human and deftly layered story, master storyteller McKillip once again shows that language can be magic. “The weave is there, the thread is there. Find and follow.”