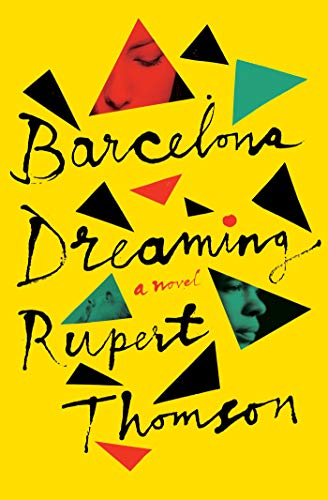 Sometimes a book is so well written and creates such a sense of place that you cannot wait to stop your life and get back to the author’s creation. Barcelona Dreaming by Rupert Thomson is exactly that kind of book.

Set in Barcelona, 2008, just before the financial crash, there is a pervasive sense of doom running through the lives of the characters. The novel is three distinct stories where some of the characters interact in a peripheral way.

The first story involves an English woman named Amy living in Barcelona. She is the mother of a young college-age woman. Amy owns a small gift shop and remarks to a friend that young men began looking at her with lust in their eyes once she turned 40 years old. One night she hears a man crying. He turns out to be a beautiful, bisexual Moroccan immigrant with whom she falls in love. Before she knows it, she is engaging in risky behavior, having sex with him pretty much anywhere he desires, even the top floor of an abandoned building.

The sex is so hot, Amy simply has no time for reasoning. As Thomson writes: “He maneuvered me away from him. Folded me over the sill. I felt the part of me that might have questioned what I was doing fly off into the night, fast as a flung stone.”

She is confronted about this affair by a busy body neighbor who objects to the Moroccan immigrant even being on the street where he lives. A particularly violent argument ends with Amy being charged with murder.

The second story of the triplet concerns an alcoholic jazz pianist who falls in love with a younger woman and her son. The pianist, the woman, and the son get along famously until the day they don’t when the son confronts the pianist over his alcoholic behavior.

After a beating at the hands of that son, the pianist finds himself in the flat on his back in the street: “I woke up on my back, rain splashing onto my face. My upper body was on the pavement, but my legs were in the gutter. The hard edge of the curb pressed against my spine. My jacket had been pulled half off, and my shirt had lost two of its buttons. I could see part of my stomach. Its softness and pallor sent a three of fear through me.”

All of the protagonists in Barcelona Dreaming live a freeform, surreal existence where they cross paths with larger-than-life characters. The pianist, for instance, strikes up an impromptu friendship with a famous international soccer player and dreams of a past lover who never takes off her shoes, even in bed.

The final story in the novel is the dreamiest one. It concerns a translator named Jordi who is tormented by an unrequited love Mireia. In this story, Jordi, while mooning over Mireia, cannot seem to escape the charismatic pull of a newfound acquaintance, a mysterious businessman he meets named Vic Drago.

Jordi quickly falls under Vic’s spell even through he distrusts everything about him. He can’t help himself because Vic turns out to be a great storyteller. The story revolves around a not-so-simple chest of drawers.

Jordi can’t help but notice the chest’s design, and Vic tells him why he bought it: “The wood was Russian birch, he said, imported from Siberia. The fact that it had been cut at night, by the light of a full moon, gave it an unusual responsiveness, a special pliancy.”

This chest takes on a life of its own and, to hear Vic tell it, it transforms itself into a wild boar and moves around his apartment. It’s all madness, but Jordi cannot turn a deaf ear to what he’s hearing.