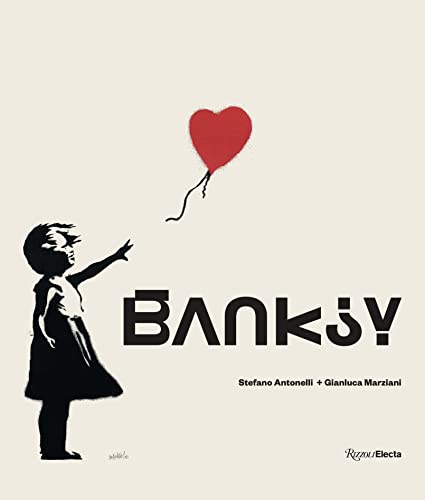 “an important analysis and catalogue of a genius at work with a smirk on his never-seen face. The aggregate of his art is Banksy’s validation and legacy. Banksy is a worthy testimonial to him and a beautiful bouquet for a legend in the making.“

There is a genius in our midst. The early 2000s have witnessed the rise of an artist who is a modern-day Goya, a political Picasso, a clever Warhol, and a mischievious Basquiat. All the contemporary challenges of art and artists are personified in the mysterious and enigmatic artist known as Banksy. Stefano Antonelli and Gianluca Marziani have taken on the formidable task of trying to define the undefinable. Banksy, the man, is astounding and astonishing; Bansky, the book, is a bold and exhaustive attempt to bring his career and reputation to a respectable analysis by two experienced curators and historians.

Antonelli and Marziani are gifted Italian art lovers who have created the first definitive catalogue of Banksy’s prodigious career. The authors take a deep dive into all aspects of Banksy’s oeuvre including his graffiti, stencils, silkscreens, sculpture, paintings, movies, and memorabilia. But even under the authors‘ penetrating microscope, Banksy remains a mystery.

As such, Banksy is like Banksy himself. The authors have brilliantly endeavored to translate the rocketing phenomenom of the artist into a coherent monograph. When held in the reader’s hands the cover seems to suggest a rather conventional coffee-table art book. However, once opened, the body of the book is a visual explosion of images and words.The layout and the content is a bold and successful attempt to examine the mid-career arc of an artistic provocoteur, trouble-maker, subversive, and iconoclast.

Banksy emerged from the graffiti and post-graffiti chaos of the late 20th century from which the genre of Street Art evolved. Banksy became the high priest of Street Art. His chosen anonymity, fearlessness,  and street cred were typical of the renegade artists who used city walls as their canvas. Spray cans, stencils, and  billboard paste were their brushes, but Banksy’s extraordinary talents and the ubiquity of his creations set him apart.

Suddenly Banksy was everywhere with his daring and brilliant visual parodies, puns, and political broadsides. Banskys appeared in England, France, Mexico, Germany, Israel, the United States, among others. His ubiquity was extraordinary, but it was his artistic gifts that were unmistakable. His scathing political attacks were, and are, powerfully brilliant, but it is his cleverness and his cool that are the attributes that have catapaulted him past his peers.

Banksy chronicles it all. The reader is witness to Banksy’s earliest anonymous graffiti scribbles to his astonishing global name recognition and the stratospheric prices realized for his work at auctions and in galleries.

As in the artist’s hilarious and historic 2010 documentary film, Exit Through the Gift Shop,  Bansky’s face is never revealed and his true voice is never heard. This is the artist as outlaw and renegade and Banksy reinforces and respects the artist‘s anonymity and his scathing wit without any insight or hints into his true identity.

There is a new paradigm in the art world and Banksy has mastered this seismic shift, perhaps better than anyone. Artists no longer have to take their work to museums, curators, or galleries for validation and exposure. Rather the Street Artists have determined that they can bypass these traditional institutions and show their work directly to the public.

The authors note with perspicacity that: ‘‘A wall is the most effective canvas for any form of public art. This was the case in the Lascaux and Chauvet caves, and it was the case for centuries of masterful Italian painting . . .“

The reference to the cave paintings is particularly insighful. In fact there is a beautiful allusion to this prehistoric legacy in an illustration of a Banksy work from 2008 on a London wall, Graffiti Remover (Whitewashing Lascaux) in which a municipal worker in his orange vest is spray painting white paint over Lascaux-like images. This illustration of this brilliant mural is in itself well worth the price of the book, and it is a good reason for Banksy to be included in any art library.

The authors have produced an important analysis and catalogue of a genius at work with a smirk on his never-seen face. The aggregate of his art is Banksy’s validation and legacy. Banksy is a worthy testimonial to him and a beautiful bouquet for a legend in the making.