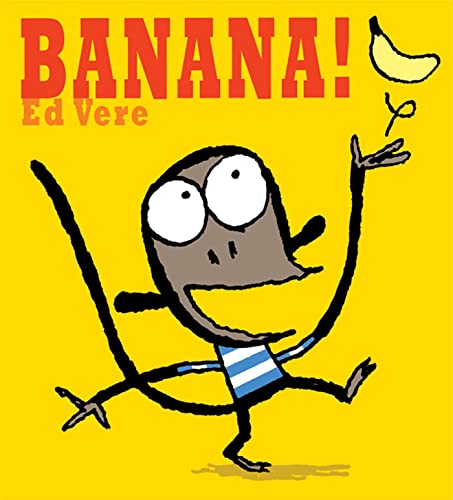 Banana! Is a nearly wordless tale about two monkeys and their battle over a banana.

Banana! begins with two monkeys encountering each other. One of the monkeys is holding a banana. The other monkey spies the banana and decides that he would like it, but the first monkey refuses to give it up. When the second monkey demands it, the first monkey refuses, waiting for the proper words. The second monkey then goes into various manipulations in trying to get it.

First, we have the demand. Doesn’t work. Then he goes for the tantrum with the tears, sprawling out onto the ground like a child in a toy store. This performance doesn’t quite get it done. The other monkey merely places his finger to his ear, waiting patiently for the proper words.

After some time, the words are finally uttered. When the monkey hands over the banana, the other monkey takes it and begins to walk away. Now the original owner of the banana is left with none. So he asks the monkey politely if he could have the banana back. Does it work? Do we have another episode? Or can the monkeys find an equitable compromise?

The artwork in this story really hits the spot with the preschool and kindergarten audience. With the spare text, the child can figure out in his or her own way what is going on in the story and what that appropriate compromise might involve.

Ed Vere is also the author and illustrator of various children’s books, including Chick, Everyone’s Elephant, Getaway, and Everyone’s Hungry. They are all illustrated and written in the same manner as this one.

Banana! has a larger format than most picture books, perfect for a child or students to view the simple, intense, and expressive illustrations. Young children will enjoy this 32-page hardcover picture book teaching them about manners in a subtle but unpreachy manner.