By the Balls: The Complete Collection 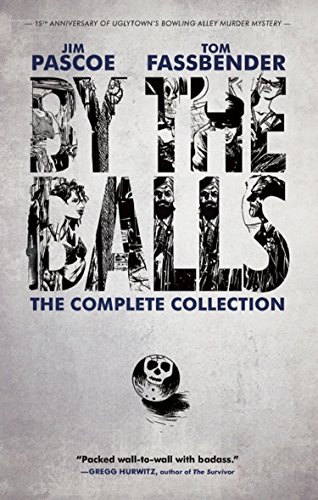 “Noir collections don’t get much better than this.”

All the early writing of “author” Dashiell Loveless (pseudonym of Jim Pascoe and Tom Fassbender) a crime journalist for the Testacy City Herald-Tribune are here in a beautifully redesigned 15th anniversary edition. The collection even includes the bowling alley murder mystery that launched crime fiction house UglyTown.

This deluxe package contains the two underground cult classic novels By the Balls and Five Shots and a Funeral; alongside two brand new short stories Fireproof and Across the Line. To complete the collection A Punch in the Gut and A Bag Full of Oranges, Partners, and Faze Out are generously added.

Ben Drake is employed by the Always Reddy Detective Agency located on the second floor of the William Kemmler Building in the business district of Testacy City, a crime-ridden town a couple of hours drive from Vegas.

He has a passion for cigars, bourbon, and women in trouble—and not necessarily in that order. More times than often, he’s the one in trouble, usually because his heart is bigger than his car, a powder-blue 1966 Galaxy 500. Other times, he’s like a noir moth, getting too close to the darkness and villains he pursues for a living:

“I spied Trout Mathers and his buddy Blackie Lawton chasing back tequila shots at the bar of H.M.S. Pandora. It hadn’t been my plan to spend Friday night watching two of Testacy City’s most sought-after gangsters do the salt-slam-and-squeeze. I’d anticipated taking the night off, doing nothing but relaxing at my favorite hangout. But this particular Friday night found me pulling double duty as I lounged at the Pandora, a hand on a drink and an eye on those thugs.

“Lawton’s laughter ripped through the place like the growl of an angry dog. Mathers shot him an elbow to the ribs. The look he gave Lawton suggested they were there to lay low, not loudmouth their way into the spotlight.”

By the Balls is manna from heaven for aficionados of noir and lovers of the classics from older masters of the genre such as Hammett, Chandler, and Cain.

The stories are fast with page-turning addictiveness, filled with gems of street-smart dialogue and characters to kill for. Numerous illustrations by Paul Pope adorn the inner pages, all of which are stark and beautifully rendered.

And just when you think it can’t get any better, over 20 short essays by industry luminaries are thrown in for good measure.

Noir collections don’t get much better than this.