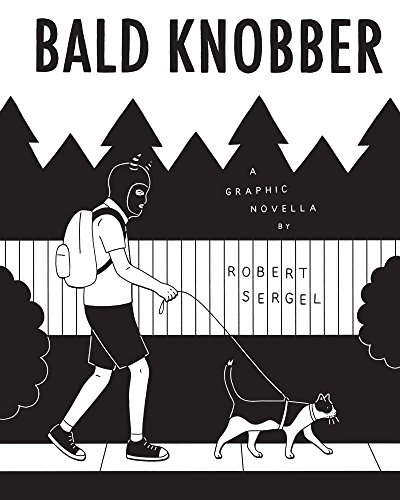 “Bald Knobber is a good example of how design matters in books, how we experience a book as an object first, then dive into the pages to discover the world inside.”

Two stories merge in Robert Sergel's pocket-sized graphic novel, Bald Knobber. Cole, a middle-school boy dealing with a difficult divorce, uses an oral report on a historical book as a metaphor for the problems he faces with his dad, mom, and mom's live-in boyfriend. The black and white art expressively tells the story of Cole's disrupted family while the text, the “book report,” tells the story of a vigilante group during reconstruction after the Civil War in Missouri.

The Bald Knobbers were “vigilantes of the Ozarks,” and as Cole describes their desperate attempts to impose order on a chaotic society, we seem him try to find justice in his own family. As Cole takes on the role of a vigilante himself, wearing a Bald Knobber mask, he faces a bully at school as well as the problems at home.

Unfortunately for him, vigilantism doesn't work any better for him than it did for the original Bald Knobbers. Violence erupts in both worlds, the historical past and Cole's present, and he comes to realize that lashing out doesn't get him the peace and stability he craves. “I guess that's the thing with violence,” he observes, “it seems like a good idea at the time . . . but it usually comes back to get you in the end.”

The weaving of the two stories works brilliantly. We feel Cole's desperation, made so much bigger by the context of a whole country in post-war dissolution. Divorce, Sergel suggests, is a battleground, with kids as the losers. What makes Cole unique in the wide range of books about unhappy divorces is the historical lens he uses to explain his world. Taking a fringe story from the 1880s that isn't widely known, Sergel gives Cole an expressive depth beyond the usual teen angst.

The art and design complement the story perfectly. Most graphic novels are big. This book is small, 5 x 6.5. A bigger book would have made the bleak story even darker. Instead the cozy size imparts a comfort despite the tough subject matter. Bald Knobber is a good example of how design matters in books, how we experience a book as an object first, then dive into the pages to discover the world inside.