The Bad Side of Books: Selected Essays of D. H. Lawrence 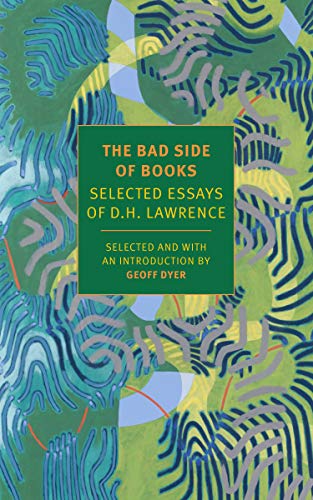 This is a book review of The Bad Side of Books: Selected Essays of D. H. Lawrence, edited and with an introduction by Geoff Dyer. But it isn’t, if only because you have not read a book review until you’ve read one written by Lawrence. Here he is on Anna Karénina, as part of his selected 1925 essay, “The Novel”:

“There you have the greatness of the novel itself. It won’t let you tell didactic lies, and put them over. Nobody in the world is anything but delighted when Vronsky gets Anna Karénina. Then what about the sin?—Why, when you look at it, all the tragedy comes from Vronsky’s and Anna’s fear of society. The monster was social, not phallic at all. They couldn’t live in the pride of their sincere passion, and spit in Mother Grundy’s eye. And that, that cowardice, was the real ‘sin.’ The novel makes it obvious, and knocks all old Leo’s teeth out. ‘As an officer I am still useful. But as a man, I am a ruin,’ says Vronsky—or words to that effect. Well what a skunk, collapsing as a man and a male, and remaining merely as a social instrument; an ‘officer,’ God love us!—merely because people at the opera turn backs on him! As if people’s backs weren’t preferable to their faces, anyhow!

“And old Leo tries to make out it was all because of the phallic sin. Old liar! Because where would any of Leo’s books be, without the phallic splendor? And then to blame the column of blood, which really gave him all his life’s riches! The Judas! Cringe to a mangy, bloodless Society, and try to dress up that dirty old Mother Grundy in a new bonnet and face-powder of Christian Socialism. Brothers indeed! Sons of a castrated Father! The novel itself gives Vronsky a kick in the behind, and knocks old Leo’s teeth out, and leaves us to learn.”

You can clearly see D. H. Lawrence was a madly brilliant writer, a fearless critic, always ready to put forth his controversial opinions in the most visceral way with, nevertheless, the intention that we learn always front and center for this stylist and debater who brought lyricism and depth to every argument he ever developed and published, within fiction and outside of it.

In this book, the selection of essays reads like a long conversation with a mentor at the end of his career, still rabidly devoted to the acts of thinking and remembering.

Here is he is in the namesake essay of the book, “The Bad Side of Books,” a 1924 introduction to a bibliography of his own writings:

“Books to me are incorporate things, voices in the air, that do not disturb the haze of autumn, and visions that don’t blot the sunflowers. What do I care for first or last editions? I have never read one of my own published works. To me, no book has a date, no book has a binding.

“What do I care if ‘e’ is somewhere upside down or ‘g’ comes from the wrong font? I really don’t.

“And when I force myself to remember, what pleasure is there in that? The very first copy of The White Peacock that was ever sent out, I put into my mother’s hands when she was dying. She looked at the outside, and then at the title-page, and then at me, with darkening eyes. And though she loved me so much, I think she doubted whether it could be much of a book, since no one more important that I had written it.”

This excerpt is only one of many in which memory and self-analysis by Lawrence play a part in these essays. Still, the more engrossing chapters are those in which he makes urgent arguments about the craft of writing in particular, especially the writing of novels, and about art and what it should mean to be an artist, in general. These are delivered with incredible clarity, foresight, and passion, as if wanting to deliver that kick in the pants that will knock old Leo’s teeth out, as in these excerpts from the final pages of the terrific 1926 essay, “Return to Bestwood,” as inspiring as it was prescient:

“And now, this last time, I feel a doom over the country, and the shadow of despair over the hearts of the men, which leaves me no rest. Because the same doom is over me, wherever I go, and the same despair touches my heart.

“Yet it is madness to despair, while we still have the course of destiny open to us.

One is driven back to search one’s soul, for a way out into a new destiny.

“A few things I know with inner knowledge.

“I know that what I’m struggling for is life, more life ahead, for myself and the men who will come after me: struggling against fixations and corruptions.”

“What we should live for is life and the beauty of aliveness, imagination, awareness, and contact. To be perfectly alive is to be immortal.