Bad Mexicans: Race, Empire, and Revolution in the Borderlands 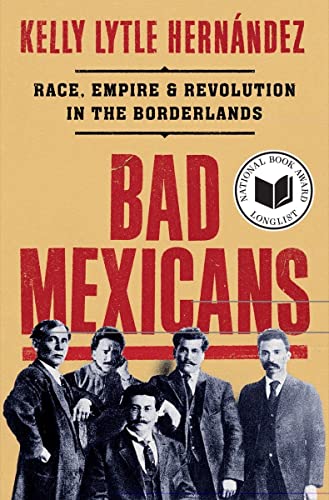 “Lytle Hernández makes the provocative argument that it was a lesser-known figure, radical transformationalist Ricardo Flores Magón, who actually catalyzed the Mexican Revolution, largely from exile in the U.S.”

The Mexican Revolution (1910–1917) is complicated. First, it started before 1910 and went deeply into the 1920s. Second, it was a civil war with numerous factions supported by armies that would forge alliances that would eventually splinter. Third, the only straightforward piece of the story is that those many factions wanted to ouster the 35-year dictatorship of Porfirio Díaz.

Those many competing and allying factions were all, in one way or another, reformist. But they fell into two broad camps: institutionalists and transformationalists. The former sought to install a more democratic system of government. The latter sought deep socio-economic reforms in support of workers and the agrarian peasantry, along with political reforms.

The names of Emiliano Zapata and Pancho Villa are, undoubtedly, the best-known revolutionaries of a transformational bent. Zapata’s revolution was southern and agrarian, while Villa’s was northern and largely proletarian (cowboys, miners, and marginal laborers of all stripes). Lytle Hernández makes the provocative argument that it was a lesser-known figure, radical transformationalist Ricardo Flores Magón, who actually catalyzed the Mexican Revolution, largely from exile in the U.S.

The two countries are deeply tied through a geopolitics of imperialism and dependency. American economic imperialism in Mexico during the late 19th and early 20th century displaced large numbers of poor workers and peasants. Many crossed into the U.S. in search of work, which they readily found in American industry and agriculture.

As Lytle Hernández astutely notes, America had little interest in a revolution that would challenge their deeply entrenched economic interests in Mexico, nor potentially turn off the migrant spigot that helped fuel the American economy at home with cheap labor.

It should come as no surprise that this effort became racialized with state-backed terror turned against Mexicans suspected of having Magonista ties. Here we can invoke the Texas Rangers who carried out a campaign of terror and intimidation against Magonistas (or any other Mexican deemed sufficiently contumacious). There were plenty of lynchings on the border.

There were myriad reasons why there was revolutionary fervor. The Díaz regime turned the country into a dependent satellite of U.S. corporate interests through their investment in and control of such sectors as mining, oil, railroads, and agriculture. As with all neocolonial dependencies, certain investments occur in infrastructure that facilitate the extraction of wealth. Americans, for example, controlled 80% of Mexico’s rail system; 85% of Mexican oil; and owned 27% of all arable land. This resulted in massive socio-economic inequality with rural Mexicans owning a scant 2% of farmland.

Under such conditions, a rapidly radicalizing resistance to the Díaz regime emerged in the early 1890s and was suppressed through various forms of state violence and repression. Not surprisingly waves of economic and political refugees crossed the border into the U.S., largely unimpeded by a then very porous border.

As part of this northward emigration, Flores Magón and followers arrived in Laredo, Texas, in 1904. They were almost immediately under surveillance from Mexican and American agents. Short on money for their dissident journalism, they were ultimately funded by soon-to-be president, Francisco Madero (1911–1913), and decamped for San Antonio when surveillance grew too intense.

San Antonio, however, proved equally unwelcoming. The city has long been a crossroads for political refugees fleeing Mexico because of its proximity to the border. That has also made it equally attractive for agents of the Mexican state and their American collaborators. The next stop was, for reasons unclear, St. Louis, where the team set up shop printing a socialist-oriented newspaper, Regeneración, and established the Mexican Liberal Party (PLM).

Flores Magón and his colleagues had a lot to critique in the Mexican political economy. Lytle Hernández notes, for example, that the cost of living had skyrocketed 200% from 1900 to 1910, leaving real wages in the dust. Often wages were paid in script that could only be used in the company store whose markups commonly were 30–40% above market value.

Mexico was a political-economic powder keg awaiting a spark. This is what made the combination of deep labor unrest and organized resistance to the Díaz regime such a powerful dynamic. And it was not just alienated and marginalized miners, railway workers, and peasants who were agitating, but also Mexico’s tiny middle class and its equally small, but emergent industrialists.

Díaz was desperate to create a veneer of calm and control to placate Americans and assure them that their investments were safe. As part of that strategy he needed the dissident journalists at Regeneración and their allied PLM to be arrested and taken out of active circulation. American authorities were equally concerned with protecting those economic interests and built a case against Flores Magón and his group. Regeneración was shuttered in 1906 by the St. Louis sheriff’s department and Flores Magón fled to Montreal, Canada, then back to Los Angeles.

As labor unrest continued to smolder, the PLM took the bold move of mounting an army across the borderlands and more deeply into Mexico. Though scantly armed, such a move underscores the levels of dissent and discontent with the Díaz regime.

Their first raid occurred in 1906 against the small borderland town of Jimenez, which was briefly liberated from government control. And so hostilities began. In the U.S., both state and paramilitary forces are brought to bear on the PLM with the intent of arrest and deportation to Mexico where they would be rounded up and, undoubtedly, killed.

Ensuing chapters detail the stories of various Magonistas as they attempt to foment revolution and flee the authorities. It reads almost like a Cold War John Le Carré novel. By 1908, the PLM had carried our four raids against borderland towns in Mexico, effectively embarrassing, delegitimizing, and destabilizing the Díaz regime. An unstable Díaz regime was a significant threat to U.S. investments.

The run up to the 1910 Mexican revolution is not a good one for either Díaz or Flores Magón. Díaz fell out of favor with his U.S. supporters as he increasingly exerted Mexican national control over key industries, including mining, oil, and railroads. Magonistas, Regeneración, and the PLM were on the wane. As civil war broke out, the PLM proved more suited for intellectual rather than armed warfare. The civil war was dominated by competing armies, but not the Magonistas or the PLM.

Flores Magón is finally arrested, tried, and sent to Leavenworth Penitentiary in Kansas where he died in 1922. Other prominent revolutionaries, Emiliano Zapata and Pancho Villa, were assassinated in 1919 and 1923 respectively. A stable and consolidated government did not truly emerge until the rule of Plutarco Elias Calles (1924–1928), which put an effective end to the Mexican Revolution.

Long gone and largely forgotten, Flores Magón, Regeneración, and the PLM were a key spark and accelerant to the Mexican Revolution, which was ultimately won by reformist institutionalists rather than a transformational people’s democracy envisioned by the Magonistas.