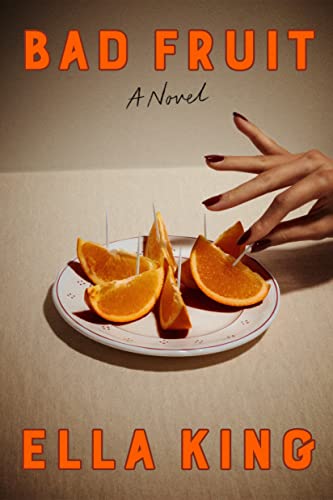 With searing writing, Ella King charts how abuse in a family affects everyone in it. Lily, the youngest child at age 18, may be the main character in the book, the one who has taken on the job of pleasing and placating her volatile mother, but her older sister and brother are equally marked in their own ways by her mother’s viciousness and her father’s bland complicity.

The book opens with Mama’s latest rage: her certainty that her husband is having an affair with their son’s ex-wife. The accusation isn’t particularly shocking as much as the way Mama wields this suspicion to drive further divisions in an already deeply broken family, making sure that everyone sides with her and hates Daddy. As fissured as the marriage is, nobody, none of their adult children, wonder why there’s no question of divorce. It’s accepted that one can live with deep loathing. All of them do.

Mama is from Singapore, Daddy British, and each of their children is a blend of their physical traits. King uses this to dramatize how deeply Lily wants to be like her mother, to be the child she’s closest to. Although her features are the whitest, she works hard to appear more Asian:

“I hold up the mirror, push my face against the glass. My reflection is as expected: dark brown eyes, black hair, skin shiny from cooking. Usually I linger over this Chinese version of me, trace her eyes, her hair, ask her, What have you done today, Mama’s girl, what have you done? But I’m not in the mood for exquisite self-harm. I reach for my pack of wipes, scrub off the yellow-undertoned makeup, sweep out the tinted contact lenses and look again. White skin. One hazel eye. One brown. My hair is still that cheap black, but when I examine my hairline, the brown is already pushing through. I sit back, relieved. Despite everything Mama has done to bring out the Chinese in me, I remain resolutely myself, her whitest child. I’m not the same as her.”

When Lily starts having flashbacks from her mother’s childhood, she fears she really is becoming her mother. The memories are painful, full of shame and terror. The cycle of abuse is clear, but as both Lily’s brother and sister ask, does that make it okay for their mother to turn into an abuser herself?

As Lily literally takes on her mother’s trauma, the marks it leaves are clearer and deeper. As she digs deeper into her mother’s past, trying to understand what really happened, she discovers the truth about her own early childhood, uncovering her own abuse as well as her mother’s.

This isn’t an easy book to read. It is deeply realistic, with each of the three children coping in their own angry way. The richness of detail and depth of understanding that King gives each character is quietly masterful. There is no happy ending, only a growing awareness of how to nurture a sense of self from the ashes of a shared pathology, the cruel ties built between Mama and Daddy and inflicted on all of their children. But there is a germ of hope and sometimes that has to be enough.