Bad City: Peril and Power in the City of Angels 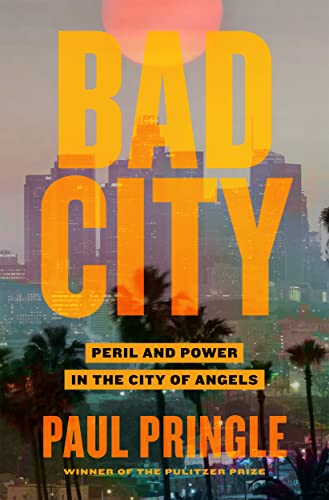 “Bad City, a startling tale of people looking the other way and behaving ever so badly, never lets up. It is one whopper of a true-crime story, written with an immediacy bound to win readers.”

Why do we keep turning pages?

Is it because of the egomaniacal medical dean at the University of Southern California (USC) who supplies drugs to his troubled 21-year-old “sugar baby” while she is in rehab? Or the USC health-services gynecologist who abuses women and keeps photos of their genitalia in a locked cabinet?

Or is it because of reporter Pringle’s growing outrage when USC officials try to cover up these scandals, while his own editors at the Los Angeles Times kill or water down his exposés about them?

Or is it the brazen shamelessness of the unspoken deal between USC and top Times editors to protect the reputation of the university’s president, no matter what?

Not least, is it Pringle’s remarkably immersive narrative of these and still other metropolitan shenanigans—an unrelenting unveiling of rampant wrongdoing—that keeps us enthralled?

It all started with a tip to the Times newsroom in 2016. A supervisor at a posh Pasadena hotel called to say a young woman was unconscious in a room registered to Dr. Carmen Puliafito, dean of USC’s medical school. The woman had apparently overdosed—the room was filled with drug paraphernalia.

But Puliafito insisted the woman was okay.

When the conscientious hotel staffer went to call paramedics, Dr. Puliafito tried to stop him. Pasadena police finally arrived, but did nothing, acting like they knew who Puliafito was. They said, “Drug abuse isn’t a crime, it’s a disease.”

In routinely following up on the tip, reporter Pringle found himself drawn into the mystery of the overdose, tracking down information on the 64-year-old Puliafito and the attractive young woman, who turned out to be a party girl and prostitute with whom the doctor was obsessed.

She was Sarah Warren, 21, a self-described “wild girl,” who had been in drug rehab at age 18. Puliafito, a reputedly arrogant, Harvard-educated overachiever “maintained his hold” on Sarah by paying her living expenses and keeping her supplied with drugs, writes Pringle. In fact, he had introduced her to methamphetamine.

The dean, a celebrated eye surgeon who had brought $1 billion in funding to the medical school, resigned abruptly three weeks after the overdose incident.

Sarah was alive, Pringle learned, but he had to track her down to learn her part of the story.

He faced a wall of silence at every turn.

“Here was a major university and the government of a well-to-do city closing off nearly every avenue of information about an incident that involved paramedics and police officers and the dean of a medical school,” writes the reporter. “It concerned the overdose of a young woman in the presence of a man who oversees the university’s training of future physicians.”

Veteran reporter Pringle was familiar with the university’s policy of “silence and secrecy” toward the news media. But did they “really believe they could bury something so egregious and public simply by not talking?”

In a driving narrative, in which Pringle details each step of his tenacious investigation, we learn that there are videos of Sarah having sex with Puliafito—and of the doctor exhaling meth smoke. The Times’s top editors have “little enthusiasm” for the story, and spike it. After much back and forth, in which Pringle’s most damaging findings are eliminated to protect USC, a watered-down story runs in the Times on July 17, 2017. The article wins wide attention and is picked up by major national media. The same Times editors “warmed themselves in the glow of the story’s huge readership,” writes Pringle.

Bad City continues at breakneck speed: An internal investigation by Times human resources officials leads to the firing of several top editors. Pringle enlists four other reporters to assist him in nailing down further details in the story. And Max Nikias, USC’s president, remains protected by a 57-member board of trustees, many billionaires.

That does not last long. In another university scandal exposed by Pringle, Dr. George Tyndall, a mid-60-ish gynecologist in USC’s student health clinic, is revealed to be sexually abusing young women patients. He is finally charged with 29 felonies by Los Angeles police. The university’s president allows him to resign quietly and does not report him to the California medical board.

Pressured by members of his board, President Nikias himself resigns.

Pringle won a 2019 Pulitzer Prize for his work on the sexual abuse story, which grew out of his earlier reporting on the medical dean.

Bad City, a startling tale of people looking the other way and behaving ever so badly, never lets up. It is one whopper of a true-crime story, written with an immediacy bound to win readers.