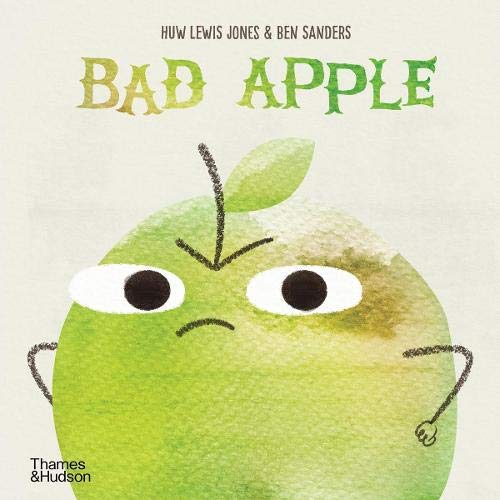 In this sparely written picture book, we’re introduced to a very “nasty piece of fruit.” Apple bullies others in a series of simple rhymes: “Oh, dearie me. He drank Pea’s tea.” “No fancy that. He stole Cat’s hat.”

The story continues in language and images that echo Jon Klassen’s I Want My Hat Back. The humor is presented in the same dead-pan, direct vein that will perhaps amuse parents more than children: “Apple and Orange. Well, that was never going to work.”

As Apple continues to make others miserable, it’s not surprising that the story ends with his comeuppance, though in a way that may need to be explained to young readers. Apple bakes a cake with snake, only to eat the whole thing himself. Not a good idea, as Jones suggests: “Better not be rude when you’re just food.” After seeing the bulge in sleek snake’s body, we turn the page to see the lump saying, “Oh bother.” And so the book ends.

The moral is clearly that bad guys get eaten. Some readers will find Apple funny along the way. Others may be disturbed by the sudden disappearance of the main character. Whether this is a book that gets read once or repeatedly will depend on if this kind of humor resonates or not. For Jon Klassen fans, Bad Apple is a good follow-up book, delivering that kind of predictable frat boy humor. For others, maybe not so much.