The Bad Angel Brothers: A Novel 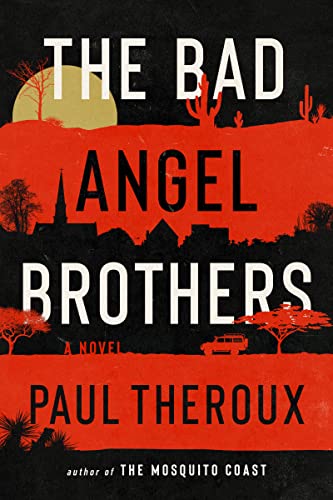 “The book’s suspense rests on whether and when Cal will finally turn to face his lifelong attacker. What will he lose, in what sequence? How humiliated and abased will he become? Is there any moment when he can say enough? As it turns out, there may indeed be such a point. And, as the saying goes, what will happen when the worm turns?”

It’s impossible to read a novel by Paul Theroux without thinking of, and even longing for, his unforgettable books of travel, from The Great Railway Bazaar onward. But although The Bad Angel Brothers opens in a small city somewhere in the cluster between southern New Hampshire and Boston, and Cal Belanger’s parents were middle-class Québecois (French Canadian) immigrants, Cal is outward bound as soon as possible. His reason: to make as much space as he can between his daily life and that of his horrible brother Frank, whom he initially labels (only to himself) “a high-functioning ass****.” Not only does Frank invert and manipulate all the stories of the lives of the two brothers—he does it with malice and intent to degrade Cal in as many ways as possible.

Somewhere along the way, mostly through his gentle father, Cal absorbed the message that he should treat his older brother as, well, a brother. But Frank either missed the message or decided bluntly that it only applied in one direction. He’s out to humiliate. And as he reaches maturity, he spreads his malevolent impact over the impoverished clients of his law practice, too.

Through one episode after another, Cal is battered and belittled. He admits the high school nickname for the two of them, the Bad Angel brothers, pins them together in an odd way. In addition, as long as he’s within Frank’s easy reach, he seems helpless to protect himself.

So it’s a huge relief to protagonist and reader alike when Cal takes his geological expertise on the road, makes some quiet gold discoveries and a few very good friends, and develops a pattern of travel that includes half the globe, thus putting Theroux’s other side to work in swiftly and evocatively sketching the people and lifeways with which Cal can readily connect. He is actually a nice person. He just seems captive, like the prototypical victim of a cobra, unwilling to run.

When Cal’s lovely and adoring Columbian wife insists on living in the New England neighborhood where Cal grew up, in close proximity to Frank, anyone but Cal can tell what will happen next. At first, his brother’s manipulations only make him more grateful for Vita, the “beautiful woman, to town, alone, innocent, not knowing that Frank was saying with assurance, ‘Vita,’ summoning her for evaluation. The vision made me love her more and vow to protect her; it made me despise Frank.”

After this, the book’s suspense rests on whether and when Cal will finally turn to face his lifelong attacker. What will he lose, in what sequence? How humiliated and abased will he become? Is there any moment when he can say enough? As it turns out, there may indeed be such a point. And, as the saying goes, what will happen when the worm turns?

That’s when The Bad Angel Brothers becomes crime fiction. And the reader, having maintained connection with Cal this long, may well be hoping some effective violence finally takes place.

Watch the magician’s hands: Theroux has some powerful twists in his hat, and the language and compelling prose with which to offer them into the spotlight. He may yet pull a coin from your ear. Or from Cal’s.