Bad Advice: Or Why Celebrities, Politicians, and Activists Aren't Your Best Source of Health Information 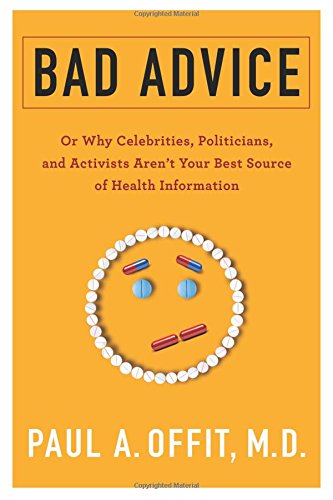 “Although science is under siege,” Offit writes toward the end of the book, “science advocates are fighting back.”

In 2013, Paul Offit appeared on the TV tabloid Inside Edition and advised viewers to ignore scientific advice provided by the actress Jenny McCarthy, an anti-vaccine activist, and Suzanne Somers, the former Three’s Company blonde actress who espouses extreme hormone replacement for older women. Somers appeared in the segment, too, and accused Offit of trying to build his reputation off of hers. Offit’s 18-year-old and 21-year-old children watched the episode, turned to their father and asked, “Who’s Suzanne Somers?”

The lesson, Offit writes in his new book, is this: “Avoid debating celebrities (unless no one remembers them anymore).”

It's one of several amusing anecdotes that Offit relays with both humor and humility in his new book, Bad Advice. Offit is a professor of pediatrics at the University of Pennsylvania’s Perelman School of Medicine, as well as the director of the vaccine education center at Children’s Hospital of Philadelphia. He is also one of the most vocal opponents of “anti vaxxers,” parents who blame their children’s autism on vaccines and often refuse to vaccinate their children at all.

Science enthusiasts will love reading about Offit’s adventures as the voice of reason in a crowd of unqualified people spouting non-scientific advice.

McCarthy is largely credited with starting the anti-vaxxer movement, and Offit has taken his fair share of barbs not only from her, but from a bevy of other non-scientists, including Robert F. Kennedy, Jr., Chelsea Handler, and Jim Carrey. Many of Offit’s critics often blast him for his role in co-inventing a rotavirus vaccine that was commercialized by Merck.

He’s widely considered a hero in the scientific community for helping invent the vaccine, which has since saved the lives of many children around the world. But his work with Merck has prompted the likes of McCarthy to label him a “pharma shill.” This despite the fact that Offit’s research was funded by UPenn and the National Institutes of Health, not Merck.

Offit has good reason to vent his frustrations about anti-vaxxers and other people who spread fringe theories that can be easily countered with science. (No scientific link between vaccines and autism has ever been shown to exist.) And he does plenty of venting in his book. But Offit never comes off as bitter, even when relaying run-ins with pseudoscience proponents that would make most reasonable people scream in frustration.

For example, he writes that he often receives threatening emails, including once recently that suggested if someone vaccinates their child against their will because the law requires vaccination “and that child dies, then that parent should have the right to kill you.” Offit has received even more direct death threats, at one point sparking an FBI investigation and requiring armed guards to escort him around scientific conferences.

The subtitle of Offit’s book sounds as if he’s providing a how-to for separating pseudoscience from real science, but actually the bulk of his tips are confined to Chapter 4, where he lays out various lessons he’s learned from his many media appearances (including the one about debating celebrities). Instead, Bad Advice is largely autobiographical—the musings of a real scientist who’s fiercely devoted to helping the public learn how to separate fiction from scientific fact.

Bad Advice is a fun and educational book that will leave readers optimistic—as Offit himself is—that fact will ultimately prevail over fiction in the world of science and medicine. “Although science is under siege,” Offit writes toward the end of the book, “science advocates are fighting back.”