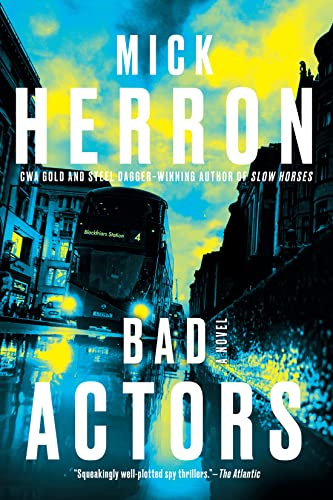 “Herron’s plot is packed with twists and delightfully sardonic conversations, and the book’s only major flaw is that at some point it ends and one must resume normal life.”

It’s hard to miss the promotion on television and online for Slow Horses, as the earliest in Mick Herron’s Slough House spy novels jumps genre into an Apple TV+ show featuring Gary Oldman. But Bad Actors, eighth in the series, has no connection to performance, despite the title that might immediately pop a stage into the back of an American reader’s mind.

It turns out that the British term “bad actor” means a person who’s done things that are harmful, illegal, or immoral. Herron’s Slough House is a discard group for MI5 spies who’ve messed up and now get tedious assignments sorting through social media or phone books or worse. Every spy assigned there—dust binned might be a good term to add—knows they’ve made a mess somewhere in their recent past, and they won’t be allowed back into the Park, the office of really performing agents, ever again.

Well, unless you count Ashley Khan. Quite young and still deluding herself that the infamous Diana Taverner will take her back into important operations, Ashley is also obsessed with the source of her demotion: Jackson Lamb, head of Slough House. On a recent assignment, Lamb caught her following one of his spies. They may be (they are) all failures, but still, they are his, and he doesn’t allow anyone to mess with them (much). So he’d broken Ashley’s arm and sent her back to Taverner, whose acid response was, “You broke her, you own her.” Back to Slough House she went.

Since Ashley is as paranoid as any other spy, and clueless as well, she’s baffled by the interactions around her in Slough House. While she obsesses on punishing Lamb, the team is actually in crisis mode. Cokehead Shirley Dander’s been send to a sanitarium to dry out; narcissist Roddy Ho is creating avatar girlfriends for himself as a distraction; River Cartwright, the most potentially sane of the Slough House discards, isn’t even around, presumed dead or permanently missing.

And like Ashley, most readers will rush a third of the way into the book, at least, before confirming that almost all the machinations taking place have Jackson Lamb behind them. One could certainly be excused for not looking at Lamb—between his predictably terrible farts, his smoking and spitting, and his disgustingly soiled clothing and office, he’s both camouflaged and repellent. But he’s also brilliant, and much sharper, it turns out, than Diana Taverner herself.

Thanks to adept storytelling, readers are aware before Lamb (or is that impossible?) that ex-spy Claude Whelan, a tool in use by Taverner, is muddying all possible waters with a notion of payback on Lamb, and he’s more effective than young Ashley:

“Where did Whelan’s loyalties lie? Not with either side. Not with any bad actor, whether in the Service he’s led or the government he’d served. . . . It still rankled, his fall from grace, and why shouldn’t he take some matter of revenge? It wasn’t really him, he knew that. He was nobody’s idea of an avenging knight. But wasn’t it time for a change.”

Soon dominoes are tumbling in various directions, only Lamb really knows their triggers, and as a savior of anyone or anything, Lamb’s even less likely than Claude Whelan. The fun (and poignant bonding) of Bad Actors lies in watching all the others, at Slough House and beyond, gradually realize that only Lamb’s irreverent demands and plans are likely to get them out of a mess that’s so absurd, so wracked with capers and collapses, then even Claude Whelan will say he can’t tear his eyes away.

Herron’s plot is packed with twists and delightfully sardonic conversations, and the book’s only major flaw is that at some point it ends and one must resume normal life. But there may be a flavor of wicked humor remaining in what one does afterward—along with great satisfaction at what Lamb and the “Slow Horses” pull out of their grubby, out-of-fashion hats.