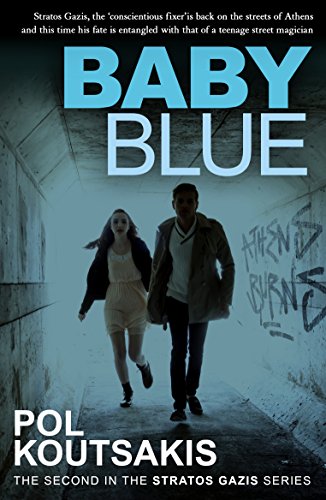 Stratos Gazis is a professional contract killer with a conscience. Selective in the jobs he agrees to take, Gazis commits to finding and eliminating the killer of Themis Raptas, adoptive father of a blind young homeless girl. An investigative journalist, Raptas was murdered in the same manner as a number of known pedophiles, casting doubt on whether he was killed because of an investigation into corporate pollution or because of a personal history of sexual predation. Has Gazis has chosen the wrong cause for the right reasons?

Baby Blue is the second crime novel in Pol Koutsakis’s Stratos Gazis series, following up on Athenian Blues. A previous publication, Just One Breath, won a national award in Greece for best young adult novel, and his play The Rotation System won a national playwriting award in 2007.

In Baby Blue Koutsakis continues the campaign to position his series firmly in the noir camp. Gazis is an aficionado of 20th century American culture, unsurprisingly, and references abound to Chandler, Ella Fitzgerald, Billie Holliday, and movies such as Clash by Night and the 1945 noir production Detour. After a while, however, the allusions tend to clatter around in the story as more of a distraction than an enhancement of the atmosphere.

More convincing is the author’s decision to set the action during the Greek Crisis, when the country faced financial collapse and Athens was reduced to political and social chaos. Halfway through the novel, first-person narrator Gazis remarks:

“I thought about this street, the street in which three people including an unborn child had burned to death inside a bank during a petrol-bomb attack without causing much of a reaction. It seemed fair that the shops should die with them. The street had given up its right to life.”

Such glimpses into conditions in Athens at the time do a much better job of solidifying a noir atmosphere than gratuitous and clunky references to movies and music. The former provide fleeting examples of mature writing, whereas the latter simply come off as sophomoric and imitative.

Emma, the young girl at the center of the mystery, is an interesting creation. Blind since the age of eight, she’s an accomplished street magician who can perform complex card tricks beyond the abilities of sighted professionals. She’s a believable character, and Koutsakis does a good job of engaging our interest in her welfare.

The problem with the novel, however, is that it’s slow, flat, and boring. It’s a given in popular fiction that every chapter must do something to advance the story, but in Baby Blue far too much time is devoted to Gazis’s difficult relationship with the pregnant Maria, the love triangle that includes Gazis’ best friend Dragos (a homicide detective investigating the pedophile murders), and our intrepid hero’s mooning over what will become of them all. There’s far too much introspection, speculation, and goofy chatter, and far, far, far too little action.

Baby Blue will be an entertaining diversion for die-hard fans of noir who just can’t get their hands on enough of it and always enjoy the de rigueur references to sad jazz singers and black-and-white films with unhappy endings. For readers looking for a good crime novel, however, this one unfortunately gets a pass.