The Autobiography of a Transgender Scientist (MIT Press) 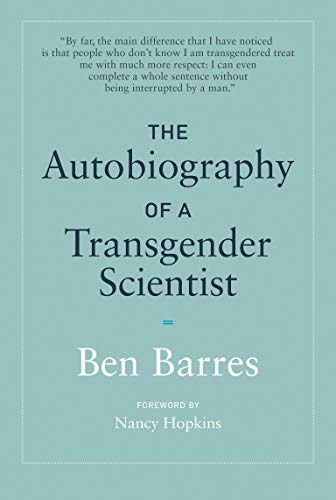 Ben Barres’ autobiography is a matter-of-fact record of a very unusual life, and was completed shortly before his death from pancreatic cancer in December 2017.  Barbara Barres—as Ben was born in 1954—fell in love with science as a child, matriculated at MIT, got an MD at Dartmouth, a PhD at Harvard Medical school, then went to London for post-doctoral training. In 1993 she accepted a faculty position in Stanford University’s neurobiology department and began work on a type of human brain cell called glia, which had been neglected by other scientists but was discovered by Dr. Barres to have a critically important role.

At the age of 43 Barbara transitioned to male and became Ben, and the larger part of this book is concerned with that process and Ben’s personal experience of the discrimination women suffer in science and usually in silence, and how different life was as a male scientist.

“By far the main difference I have noticed is that people who don’t know I am transgender treat me with much more respect: I can even complete a whole sentence without being interrupted by a man.”

The author reviews the still inconclusive thinking on the causes of transgender speculating that his condition may have been due to his mother’s exposure to a testosterone-like drug during pregnancy, which did not, however, affect his twin sister. During his teenage years he discovered that he had been born without a uterus or a vagina though the “birth defect” had been “corrected” by plastic surgery.

He notes throughout his medical training the paucity of women in science and the routine sexism and discrimination meted out to himself as Barbara, and the few other females in class. Later she felt that an unexpectedly early offer of a tenured position at Harvard was an attempt by the university to diversify their faculty. In the event, Barbara decided to stay at Stanford, where she discovered at the age of 40 her breast cancer related to the BRCA2 genetic mutation, which her mother also carried. She had a double mastectomy that she experienced as a great relief.

Some three years later, after reading a number of articles about successful transitioning, Barbara realized that this is what she needed to do though she was aware that transitioning could have a negative impact on her career and funding for her lab. At the time the American Psychiatric Association still listed “transsexuality” as a mental illness.

One of the most touching parts of the book that gives a clear insight into the author’s character is the letter written to family, friends and colleagues explaining the intention to transition to Ben. Despite his misgivings he received tremendous support, and his career continued to flourish. He became the first transgender scientist to be elected to the National Academy of Sciences (NAS) in 2013.

He describes amusingly the effects of testosterone on body fat distribution and hair loss, and surprisingly or not, on his ability to cry which was much reduced.

Not only has Ben Barres served as a role model and mentor for LGBT scientists, but has also championed fiercely the cause of women in science, having seen first hand the discrimination they suffered through the presumption of their incompetence in the field unless proven otherwise.

Though the science content of this book will pass over the heads of certain readers, the passion and dedication that made him such an outstanding scientist as well as mentor and role model shine through. As one of his obituaries reads he has left “a towering legacy of goodness” in his public and private life.