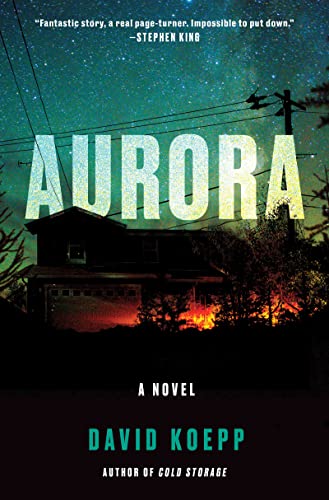 “Aurora provides a refreshing alternative to most apocalyptic tales but . . .”

Aurora, an apocalyptic novel by famed screenwriter David Koepp, brings an average person’s perspective to a subgenre that often casts capable prepper survivalists eager to put their arsenals to good use. Far from thriving on disaster, Aubrey Wheeler couldn’t be any less prepared. Her freezer isn’t stocked, she can’t pay her bills, her gambling ex-husband keeps coming around for cash, and she’s trying to raise his teenage son even though the two of them can barely stand each other.

In a memorable scene near the beginning of the book, Aubrey stands in front of the black steel storage rack she bought post-COVID, intending to stock it with supplies. The only items on the rack are a few cans of black beans (which she doesn’t like) and a neatly laminated list of recommended disaster supplies. “She’d gotten off to a great start. The lamination, she felt, was a particularly heads-up touch.”

Aubrey’s lack of preparedness and general life problems raise the stakes for her survival, as well as making her more relatable to readers who don’t thrive on disaster preparedness. By contrast, her billionaire brother Thom (whose help she absolutely refuses to take) is obsessively prepared, with a stocked underground bunker complete with servants and armed guards. As the book plays out, Aubrey’s self-sacrifice and ability to form human relationships turn out to be much more valuable assets than all of Thom’s carefully hoarded supplies.

The apocalypse in this tale is a massive solar flare that destroys most of the world’s electrical infrastructure. Like in William R. Forstchen’s novel One Second After, the world becomes suddenly local, with no way to communicate or travel outside a small radius. Koepp does a good job of portraying the flare as a credible event, especially in the introduction, when he describes a similar event that really happened in 1859. For most of the story, however, the cause of the apocalypse is immaterial; this is a story about personal responses to drastic social change.

The book is full of compelling and flawed characters, with believable cruelty and selfishness as well as persistent love and kindness. Unfortunately, an otherwise enjoyable book is marred by a disappointing ending. After spending the entire book as a self-centered, narcissistic, and obnoxious person, one of the characters makes a selfless choice that mirrors a much more destructive choice he made in the past. It is presented as a redemption for the past action, but it falls far short, even ignoring all of the other ways he has hurt and belittled people, thinking only of himself as thousands die.

Aurora provides a refreshing alternative to most apocalyptic tales but fails to deliver a satisfying conclusion.