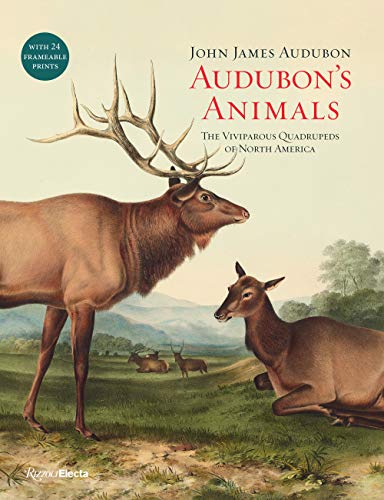 Mostly known for his naturalist work with birds (the National Audubon Society is, after all, dedicated specifically to protecting birds and their habitats), John James Audubon (1785–1851) wandered the American frontier also observing land species. After the broad success of his first publication, The Birds of America (originally published in sections between 1827–1838 and considered one of the most famous books ever printed), Audubon was pressed to create another volume.

With less knowledge regarding mammals, Audubon partnered with a leading American mammalogist, natural historian, and taxonomist, John Bachman. It was Bachman who offered up the title of the book to be viviparous quadrupeds: quadrupeds because they would only include four legged animals (no bats or marine species); viviparous because they would also only include live birth animals (no reptiles or amphibians).

As Audubon’s illness impacted his artistic abilities, his sons Victor and John W. took over the painting duties and business operations. Victor painted the background scenes and John W. delivered nearly half of the mammals. The Foreword indicates that there is a discernible difference between the prints that are credited to Audubon and those credited to John W. It takes a very astute eye and careful study to pinpoint the differences, but Audubon was clearly the stronger artist.

The Audubon pieces appear more lively. The Chipping Squirrel (chipmunks), the Grey Fox, and the American Bison, for instance, all radiate energy. Great care was taken to tell a story of the animal’s personality, expressions, habitats and habits. The Chipping Squirrel includes not just one little critter but four, all caught in snapshots of action, in different poses, demonstrating the busy scurry of their life.

Likewise, the Grey Fox is depicted as if emerging from an embankment that could double as a den entrance. He is sniffing the air, noticing a tiny feather floating by, indicating perhaps the location of dinner. The Bison image is laden with details, from the impeccable rendering of the hide to the calm and peaceful herd that is resting nearby in a quintessential American West landscape. He looks as if he is just about to lower his head and resume his grass-nibbling. In each picture, the foliage is equally intended to communicate a true and natural setting. The Audubon spirit is palpable in these pages.

When entering into John W.’s paintings, the animals seem flatter, less animated, more generic with little personality to their countenance. The Musk Oxen look bored, the American Black Bears look like statues frozen in time, and the Armadillo looks almost as if he were photoshopped into his surroundings with a sly smirk as if to say, “Yeah, so! What are you going to do about it!”

Without a doubt, father and son had a very different stylistic touch. Father Audubon cared very deeply about his animals. Son Audubon, although also a keen naturalist, seems to want to just get the project finished, complete his obligation to the family business, and move on to his own interests. This may not be entirely accurate, but they obviously had different agendas and some of that shows in the prints. The Foreword explains it as a difference between the use of live animals as models in some cases verses the use of museum specimens in others. It could also be explained by a difference in Audubon’s watercolor medium verses John W.’s preference for oil paint.

It is unclear what text, if any, Bachman supplied to accompany Audubon’s original book. Other than the Foreword, only the pictures occupy these pages. Audubon's Animals: The Viviparous Quadrupeds of North America is a reproduction of the original art series. The 150 portraits created between 1845–1848 were hand colored black and white lithographs. They have been replicated on high quality paper intending to mimic the color and texture of the originals.

This “collectors” edition comes boxed with 24 loose prints, a selection of repeats also included in the book, which can be displayed as individual pieces, so as to spare the reader from having to tear apart the book should they choose to hang up their favorite scene, if by chance their favorite happens to be one of those 24. If one is unable to get their hands on a copy of the original Quadrupeds, or unwilling to spend $1,500 on a single limited edition blind embossed Oppenheimer print, consider this a worthy alternative.