Audrey and Bill: A Romantic Biography of Audrey Hepburn and William Holden 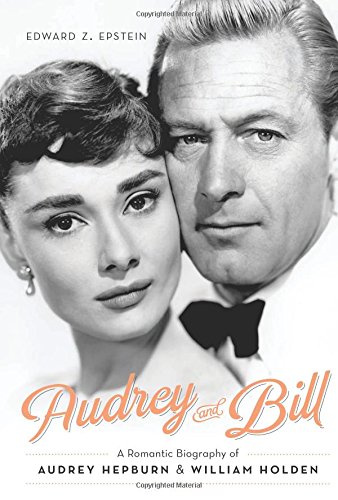 The back cover of Edward Z. Epstein’s new book Audrey and Bill makes a simple statement: “Here for the first time is the complete tale of an on-set romance that turned into a lifelong love story between silver screen legends Audrey Hepburn and William Holden.”

And, indeed, the book jumps right in—“A young woman fell in love with a married man at their workplace.” It’s the first line of the book, followed by some clues: “In appearance, she exuded an air of extreme fragility. Her slim frame, huge, almond-shaped hazel eyes, her infections laugh and genial disposition, her lilting, soft voice, and her impeccable manners gave the impression that, more than anything else in the world, she wanted to please.”

Then, for slower readers, all is made clear: “The young woman was Audrey Hepburn, the man was William Holden.”

Brought together by writer/director Billy Wilder for the purpose of creating one of Hollywood’s most delightful film romance, Sabrina, Hepburn and Holden apparently found each other to be as beautiful and charming as film audiences had and the two were soon involved in what Epstein would have you believe was a life-long passion.

Would that it were so.

That there was, during the brief time in which the two were caught up making a film together, a relationship involving the two of them seems quite likely. But even the text of Epstein’s own book indicates that the passion came and went and that, by the time filming wrapped and the two moved on to other projects, their interests had shifted as well.

The problem was, of course, the fact that Holden was married to wife Ardis and that Hollywood, in the time in which Sabrina was released (1954), giants like Hedda Hopper, Louella Parsons, and Sheilah Graham roamed the Earth, gossipmongers with the power to destroy careers with indications of immorality. Given that Holden was already suspected of having had romantic interludes with his leading ladies in the past and that Hepburn was new to Hollywood, only just having starred in one picture before Sabrina, the enchanting Roman Holiday, for which she had won an Academy Award meant that the reporters were paying close attention for any clues of a tryst.

According to Audrey and Bill, the young lovers snuck away to quiet restaurants in the evening and spent the afternoons together in one or the other’s dressing room. There they became increasingly entangled, physically, emotionally, while Billy Wilder lit the set and Humphrey Bogart, who had been hired to replace Cary Grant in playing Holden’s older brother, Linus Larrabee, in the film groused and pouted and called Wilder “a Kraut bastard.”

For anyone other than Hepburn and Holden, Sabrina was not a happy place to be.

For costume designer Edith Head was unhappy because Hepburn brought her favored designer to the film to create her key wardrobe, and in doing so created some of the best fashions in film history.

Bogart was unhappy because he felt that he was both too old and miscast in the part of Linus—worries that carried with them some validity.

And Wilder was unhappy because of the friction on the set, especially when it came to Holden, with whom he had already made two films, Sunset Boulevard and Stalag 17, but who now came to the set with a catch phrase (“Warm up the ice cubes!”) that indicated that the actor’s drinking was just beginning to become an issue.

But Audrey and Bill—happy as clams.

“Often, during their relationship, Audrey spoke of children. She told him she wanted three, maybe four, and would retire from the screen to raise them. Once, while chattering brightly about the names of their future children, suddenly an embarrassed smile, tinged with fear, crept into Bill’s face.

“What did it mean? He told her that the one thing, the only thing they could not have together—was children. He would recall the fixed expression in her eyes; how she stood looking at him like a hurt, bewildered child. Her eyes searched his face as he explained that he’d had a vasectomy years earlier at Ardis’s urging, and it could not be reversed. He was physically unable to have any more children.

“He waited until now to tell her this? Her sudden formal, remote air on hearing this kept Bill at arm’s length. He hoped she wouldn’t hate him. It had to have made them both sad to know that the trusting simple part of their relationship was gone for good, certainly as far as she was concerned. Bill, however, never have up hope that some miracle would set things straight. She ended the affair on the spot.”

This passage illustrates many of the issues contained within the whole text.

How is the author privy to this information? What is his source in writing of this encounter—or, indeed, most of the rest of the encounters in the book? He fails here, as he often does, to attribute the story to anyone. We are left to guess the locale, the timeframe, or how this exchange fits into the overall narrative of the book—were the two still filming Sabrina at this moment? If so, how were they in working together from this moment onward?

The questions are many; the answers are few.

Indeed, Audrey and Bill seems like an extremely long Wikipedia entry, rather than a serious biography of film stars, with author Epstein padding his premise of life-long romance as much as he is padding established scenes while inventing others out of whole cloth.

The result is a rather unsatisfying and frustrating dual biography, one that seems to have been drawn almost completely from other works on the subject of Hollywood and its actors, and one that would have been much better had it targeted one or the other of the two.

In that we are given more insight into Ms. Hepburn, her films, her marriages and her ultimate dedication of humanitarian work, she would likely have been the better choice.

Instead, we flip-flop between the two, as Holden makes a continual slide into alcoholism and early death, while Hepburn marries, divorces, and marries again, and then embarks on relationships with actors Albert Finney and Ben Gazara, among others, while making films like Breakfast at Tiffany’s, Charade, and Wait Until Dark.

Likely, while playing blind and struggling for the knife with Richard Crenna, William Holden was not much on her mind.