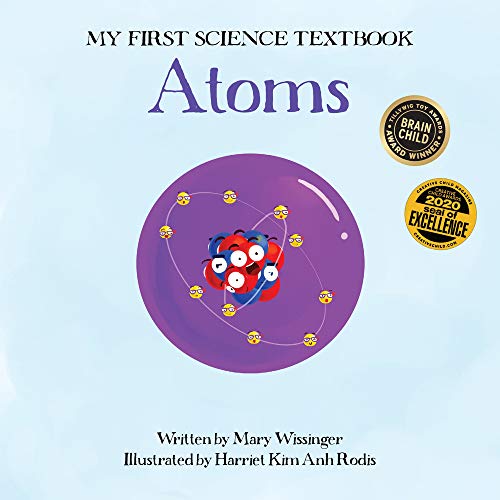 “This book will certainly inspire many new questions.”

A picture book about atoms is an ambitious endeavor. How do you make this complicated science comprehensible to the youngest readers? The author starts out simply enough: “Say hello to the atoms that build everything you see.” The illustrator shows the atoms as groups of happy faces, brightly colored and appealing. But the story soon gets to a level that will escape most kids; “The strong force holds the nucleus tight, while electrons get to race.”

What does that mean? What is the strong force? And how do electrons race? The useful glossary at the end of the book does not include “strong force,” so that will remain a mystery. It gets even more complicated when the author asserts, “When atoms get together, electrons are for sharing and taking.”

Once again, what does that mean? How is an electron “shared”? What happens to an atom that does that? Does it change into a different atom? Children are natural young scientists, asking questions about how the world works. This book will certainly inspire many new questions. What it does less well is provide many answers.

The description of the period table is just as lacking, though the illustrator gamely tries to make up for the text’s lack of clarity. The problem goes beyond the individual pages to the concept of the book itself. Why write about atoms for readers this age? What is the basic important information that they’re capable of understanding? It’s not insulting to kids to say that some concepts may be beyond them. We hardly expect five year olds to grasp the Pythagorean theorem, yet they should understand atomic structure? There’s a rush to get children to understand STEM subjects at younger and younger ages, but this does them a disservice. You don’t make children smarter simply by writing about complicated subjects for them. But you can confuse them. There are many early science books that inspire wonder in young readers or encourage them to observe and think. This book, charmingly illustrated as it is, is not one of them.