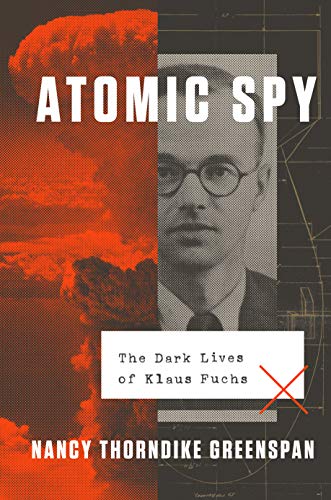 “This book proves that the abstract ‘ideal’ of communism has not died for some people despite the empirical evidence of communism in power. Klaus Fuchs does not deserve our sympathy for siding with and aiding one of the most vicious tyrannies in history.”

How does one explain a 21st century book about Klaus Fuchs, a committed communist who provided atomic secrets to Stalin’s Soviet Union during and after World War II, that sympathizes with its subject? Does the author, Nancy Thorndike Greenspan, know nothing about the history of communism in power? Does she know nothing about an ideology that is responsible for the deaths of more than 100 million people?

Fuchs, a scientist who worked on the Manhattan Project in Britain and the United States and on research for the hydrogen bomb during and after the Second World War, provided atomic secrets to the Soviet Union between 1943 and 1947. He was arrested in Britain in 1950 and pleaded guilty to violating Britain’s Official Secrets Act. He served about nine years of a 14-year prison sentence. He was released from prison in 1959 and spent his remaining years in East Germany working for the Stalinist regime there until his death in 1988.

He was an unrepentant communist to the very end. He had no regrets for aiding Stalin’s regime. Communism was his ideal—his faith—and he clung to it throughout his life. Greenspan speculates that had Fuchs lived to see the Soviet Union’s collapse, “[t]he disintegration probably would have disappointed him, watching the ideals of communism crumble to the ground—ideals he held so close and had risked so much for.”

Fuchs was born in Russelsheim, Germany, south of Frankfurt, in 1911. His father Emil was rector of a Lutheran church. Klaus Fuchs studied physics and mathematics at the University of Leipzig. He joined the German Communist Party in 1931, two years before Hitler came to power.

Greenspan notes that Fuchs was active in Germany’s communist underground. He fled Germany when Hitler came to power, lived briefly in Paris, then settled in England. While in Paris, the author notes, Fuchs “had entrée to some of the most influential left-wing intellectuals, as well as communist leaders, outside Moscow.”

In Britain, he was treated as a refugee from Nazi Germany. He studied theoretical physics at the University of Bristol. He also studied Marx and Lenin, and helped start a local branch of the Society for Cultural Relations Between the Peoples of the British Commonwealth and the U.S.S.R. When the Spanish Civil War broke out, Fuchs, like all good communists, joined a committee to provide aid to the Republicans in Spain.

Fuchs studied quantum mechanics under Max Born at Edinburg University. He applied for British citizenship in 1939, but after war broke out between Britain and Germany Fuchs was interned along with thousands of other German aliens. “Internment,” Greenspan writes, “deepened Klaus’s suspicions regarding Britain’s true motives.” Fuchs was convinced that Britain’s goal was not to protect freedom and democracy, but to compromise with the Nazis. Unlike many other communists in the late 1930s, Fuchs did not leave the Party or the “cause” after Stalin signed the Nazi-Soviet Pact.

Some of the German internees, including Fuchs, were shipped to Quebec, Canada, where their makeshift prison was situated near the Plains of Abraham overlooking the St. Lawrence River. While in Canada, Fuchs befriended Hans Kahle, a German communist who had fought with the International Brigades in Spain. Greenspan believes that Fuchs’ association with Kahle likely reinforced his commitment to the communist cause.

Fuchs was among those aliens who were released from internment when it was determined that they did not support the Nazi cause. An unforgivable security lapse, however, allowed Fuchs to obtain British citizenship and work on Britain’s secret atomic weapons program despite knowledge of his communist past in Germany. British security officials compounded that security breach when later in the war they assured their U.S. counterparts that Fuchs was not a security risk so could be assigned to work on the Manhattan Project. Unbeknownst to the British and American governments, Fuchs had begun working for the Soviets sometime in 1941.

Greenspan provides details of Fuchs’ work at Los Alamos and his covert meetings with his contact in America, codenamed “Raymond” (later identified as Harry Gold), through whom he passed atomic secrets to Stalin’s regime. Fuchs was part of a Soviet network of atomic spies in the United States that included Gold, Julius and Ethel Rosenberg, Theodore Hall, and David Greenglass.

After the war, Fuchs worked at the British nuclear research facility at Harwell and continued to pass secret information about the development of a hydrogen bomb to the Soviets, this time through Alexander Feklissov. Fuchs’ traitorous activity continued into 1947, long after the beginnings of the Cold War. By that time, British and American security officers were closing in on Fuchs with the benefit of the Venona intercepts.

When Fuchs was arrested by British authorities in early 1950, he confessed to working for the Soviets, and provided some, but rather minimal, cooperation to British and American investigators. Fuchs’ arrest and prosecution coincided with repeated revelations of the extent of Soviet penetration of the British and American governments. This included in Britain the so-called Cambridge spies Kim Philby, Guy Burgess, and Donald Maclean, and in the United States the Rosenbergs, Alger Hiss, Harry Dexter White, Lauchlin Currie, and others.

Greenspan concludes her book by excusing Fuchs’ traitorous behavior by praising his conscience, which she describes as “a solid core at the root of very complex man.” “His life,” she writes, “was consistent and constant to his unwavering set of ideals. He sought the betterment of mankind that transcended national boundaries. His goal became to balance world power and to prevent nuclear blackmail. As he saw it, science was his weapon in a war to protect humanity.”

Greenspan then downplays the consequences of what she refers to as “his deed.” The Soviets would have developed their own atomic bomb even without Fuchs’ help, though probably not until 1951, she explains. And the fact that the Soviets were able to develop the bomb earlier thanks to Fuchs “might have kept the United States from dropping an atomic bomb on North Korea.” And she closes with the question: “Was the person who made that happen evil or good, guilty or innocent, a traitor or a hero?”

This book proves that the abstract “ideal” of communism has not died for some people despite the empirical evidence of communism in power. Klaus Fuchs does not deserve our sympathy for siding with and aiding one of the most vicious tyrannies in history. His “conscience” and “ideals” led him to betray his adopted country of England to a regime that ultimately sought to enslave England’s people. To forthrightly answer the author’s concluding questions: what Klaus Fuchs did was evil, he was guilty, and he was a traitor.