The Atom: A Visual Tour (The MIT Press) 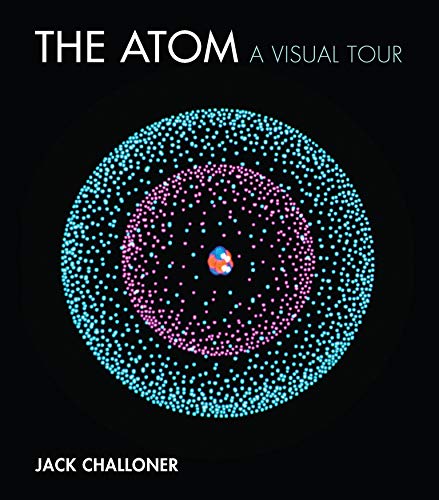 “We have progressed from seeking the nature of the particles that make up atoms and matter to the realization that there is no such thing. Our understanding today of these fundamental particles is that they are mere ‘excitations’ of enigmatic fields that permeate all of space.”

What is all the stuff we touch, smell or see made of? This ageless question contemplated by the early Greek philosophers continues to challenge 21st century physicists. As Jack Challoner brings out in his beautifully illustrated book The Atom: A Visual Tour, we have come a long way from the notion of the basic elements of earth, air, fire and water to the Standard Model of the universe, which consists of the likes of quarks, neutrinos, and even the last piece of the puzzle, the recently discovered Higgs boson.

Because the atom has played a central role in the fields of physics and chemistry over the past 200 years, the book takes us on a journey that reviews the history of those two fundamental fields of science and even tosses in a little molecular biology and geology along the way.

We learn how John Dalton’s atomic theory provided grounds for understanding elements, compounds, and chemical reactions in terms of “tiny particles.” But it was all only “theory” to most scientists of the 19th century. The consensus belief at the time was that atoms don't really exist.

To challenge that belief system, even scientists like Einstein got into the action. One of his first contributions to physics came by way of rigorously explaining how the atomic nature of liquids contributes to the random movement of pollen grains in a drop of water that is observed under a microscope.

By the 20th century atomic theory was finally accepted, but only at the expense of realizing that the concept of an atom as a solid piece of something became obsolete. Quantum theory arose, the only way we have found to understand the behavior of atoms, molecules, and the fundamental particles that make them up.

To say that the book covers a vast array of topics is an understatement, as it speeds along at an Indy racecar pace from colloids (like mayonnaise) to magnetic resonance imaging to quantum field theory. Such broad coverage in less than 200 pages is bound to fall short occasionally in explanation, but author Challoner does an admirable job of balancing explanation with breadth of coverage for his primary theme.

The book expounds on the classic periodic table, Feynman diagrams for understanding how to account for fundamental particle interactions, and what we are learning in the ultimate search for the atomic building blocks of matter, thanks to the renowned Large Hadron Collider at the CERN particle accelerator on the border of Switzerland and France.

As important as it is to discover new particles, we find that in some instances understanding matter comes not from the individuality of the particles but in the cooperative nature of the entire collection. Such is the case with semiconductors, the one amazing material singularly responsible for the computer revolution.

Some readers may be disappointed that short shrift is given to the remarkable personalities that contributed to the history of the atom and the discovery of the fundamental particles. But the author’s purpose is that of seeking the natural history of the atom and its constituents. We have progressed from seeking the nature of the particles that make up atoms and matter to the realization that there is no such thing.

Our understanding today of the fundamental particles is that they are mere “excitations” of enigmatic fields that permeate all of space. These 18 or so quantum fields that saturate the universe entangle and interact with one another, even in some cases that can only be described as “virtual.” What is this strangely interconnected network of fields? Most physicists would agree to the answer: Who knows? But the knowledge they have acquired in pursuit of the answer has brought us a fundamental understanding of how matter and nature “work” and that quest has been for the overwhelming benefit of humankind.

Although inviting pictures rather than text first draws our attention to The Atom: A Visual Tour, the accompanying text provides superb explanatory material that makes this small book a delightful read for those seeking to learn how chemistry and physics have so rapidly evolved over the last 200 years.

James Marshall Smith is a physicist and a novelist. His most recent book, Hybrid, was a short-list finalist for the William Faulkner-Wisdom Award and his debut novel, Silent Source, was an international finalist for the Clive Cussler Grand Master Award. An adjunct professor at Emory University in Atlanta, he was formerly a Distinguished Consultant/Scientist with the U.S. Centers for Disease Control and Prevention.