Atheism: The Case Against God 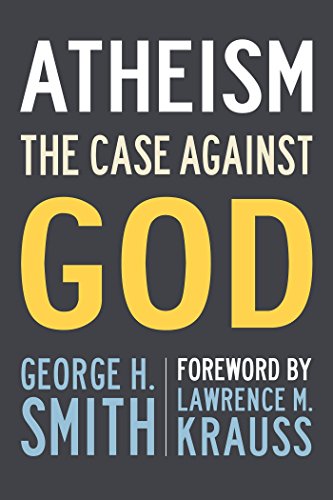 Atheism: The Case Against God is a reissue of a 1979 title by the same name. Author George H. Smith can either be considered a forerunner of the New Atheist writers so popular in the late 2000s, or as someone supplying a summary and capstone to their work. Readers should not let the decades that have passed since the original publication dissuade them from an enlightening read.

Smith wrote this book as an early twenty-something. His polemical style is typical of a youth whose views are clear, somewhat strident, and unmoderated by the paradoxes a person is likely to encounter over the course of a long and complex life. As a master of critical thought, he systematically describes and then flawlessly refutes just about every possible argument for the existence of God, cleanly outsmarting and out-reasoning any case a religious apologist could mount.

Smith lists three requirements for a belief to claim the status of knowledge, and of course traditional religion fails all three. He makes a particularly good point in stating that those who claim God is unknowable, yet insist they are certain he exists, are not entirely rational.

To the extent that reason is the paramount means to truth, Smith’s arguments neatly destroy the concept of religious faith. His arguments are based on solid reasoning skills and difficult to dismiss, based as they are on a binary sort of logic where God as a discrete being, separate from all of us, and not a part of the natural universe must either be declared definitively to exist or not exist.

But Smith’s strongest contribution in this work is the clarity and finality of his arguments separating morality from religious belief. He cleanly refutes the conventional world’s stereotype of the atheist as an insensitive amoral cynic. “A rational morality is based on standards;” [or values] “a religious morality is based on rules.”

Focused on guilt as it often is, Smith claims religion is profoundly anti-life, especially in terms of its psychological effects. While this may be indisputable with regard to certain forms of religion Smith’s citation of Ayn Rand for support of his premise is less than satisfactory. There is perhaps more valid justification among the proponents of positive psychology.

The epilogue (added for this version) helps the wisdom and proper audience for the book fall into place. Today’s twenty- and thirty-somethings grew up in a culture war battlefield of stark disputes between the conservative and progressive worldview. Their understanding of religion is undoubtedly stunted by overexposure to two growth-limiting conceptions:  1) the over-literalism of the fundamentalist mind, and 2) the progressive modernist’s rejection of all things spiritual in favor of absolute reliance on human reason and the findings of science.

Smith’s arguments offer a wonderful exercise in critical thought and challenge literal believers toward more comprehensive thought patterns, e.g. “On what basis can [one] believe the miracles of Christianity and yet deny the reported miracles of other religions?”

In the study of spiritual development, we learn that critical reflection on the truths we were brought up with and the resultant distancing from the teachings of our tribe are healthy and a necessary, important step on the road to a more integrated form of spiritual maturity. Smith provides all the logic anyone would need to make that first move beyond literal religious belief.

The arguments he mounts are highly needed by certain segments of our society—young adults now at the perfect age to be critically analyzing the “truths” handed to them by their tribe, and older adults who still have this necessary maturation task before them.

Atheism: A Case Against God is the perfect antidote to cure pre-critical minds of the spiritual myopia involved in literal and insular religious belief. Once Smith’s arguments have been digested, however, one can only hope readers will remain open to other materials with the power to challenge them toward even more comprehensive and more spiritually inclusive perspectives.