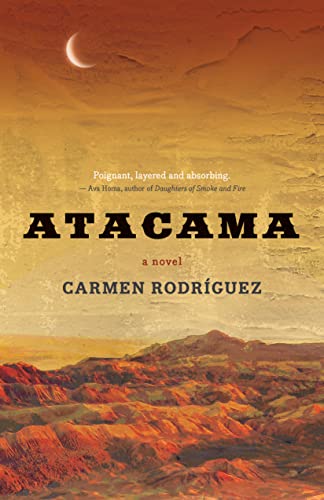 “Atacama is an important witness to history, an homage to the people of Chile, Peru, Spain, and all oppressed citizens anywhere in the world.”

In the Afterword of Atacama, author Carmen Rodriguez talks about the genesis of her novel: a deathbed confession made by her own mother. Rodriguez recreates this last secret story as a pivotal experience around which the novel revolves: a brutal vision of floods and stench, dead bodies of murdered citizens of Tacna, Peru, in April, 1925. What Rodriguez’s mother saw, which haunted her all her life, were the bodies of citizens who were eliminated because the government didn’t want their voices—or their votes to be heard. They murdered them because they feared these citizens would vote them out of office. Murdered into silence. Just one of the many examples of oppression that citizens of the working class endured in Chile and Peru from 1925–1949—the bookend years of Rodriquez’s novel.

Atacama is historical fiction with a capital H which reverberates today through the lives of revolutionary activists in Chile, Peru, Spain and even Paris, as well as journalists and artists over decades. The story begins, alternating from the point of view of two pre-teens from different social classes (Manuel from the proletariat and Lucia from the elite) who share a strong bond over the years through the political landscape of these countries.

Manuel, 12 years old and living in a poor family in La Caruna, is the son of a union leader for the Workers Federation of Chile, a “blaster” in the saltpeter mines, in charge of the “blastings” and explosives. Naturally, he is the representative of the workers in the movement to unionize. We witness Manuel’s violent coming of age as his father’s workers’ union is poised to strike—a coordinated action with miners, railroad workers, cart operators, and longshoremen. In the ensuing fracas with government soldiers trying to quash the rebellion, Manuel’s father and younger sister are brutally killed in front of him. After he buries his sister, Manuel and his mother and remaining siblings are put on a train and shipped as refugees to the coastal town of Iquique.

Lucia, the pampered child of the elite, the daughter of a high-ranking officer in the Chilean army, lives in Tacna and fills her days with bourgeois concerns: what to wear to church, music, and dance lessons. Her father is devoted to her and her mother a socialite: “My mother was like a hummingbird, always in motion, bustling about, organizing banquets and fashion shows at the Officers’ Wives Club. . . .”  Lucia has an awakening when on an outing with a friend, she escapes a massive flood of tumbling water, moving sand and rocks filled with decaying body parts from shallow graves—all unearthed by a rainstorm.

When Lucia and her parents inexplicably flee Tacna shortly after Lucia’s witnessing of the burial sludge, she overhears her father bragging about his role in the massacre of these people who floated by in the river of mud. Her confusion about her father as a mass murderer, her horror at the vision sets Lucia on a path of awakening to the realities of social justice and class that occupy the years of Rodriquez’s novel.

Later, when Manuel meets Lucia in the seaside town of Iquique, each has suffered traumatic and transformative life events both horrifying and haunting. This creates the ground upon which their friendship over the years, grows. Manuel goes on to be a journalist, Lucia continues her love of dance.

The historical detail, the insights into the citizens’ movements of resistance to terror and oppression when witnessed through the voices of Manuel and Lucia are an homage to human resilience. This sweeping novel that alights, lands on, and explores the vibrant life of Valpariso, Santiago, the Chilean diaspora and the Spanish Civil war during those decades is a testament to the courage and endurance of its people whose lives and rights have been silenced over generations by military, by government and the elite.

Rodriquez is a gifted storyteller; and her novel is wide-ranging and thorough (including a literary glance at Pablo Neruda in Paris). But what makes this story so well integrated is an irrepressible love of the arts woven into the story as each character finds a safe haven in storytelling and dance. Like a flower poking through grey cement, these gifts seem to float above the stench of the brutality directed at the citizens who will not conform to fascist will.

As Rodriquez ties up her novel with a recent-day tribute to her character Lucia in 2021, the events in real life of Chile illustrate the depth and relentless historical struggle endured by the Chilean people. As late as 2021, an overwhelming majority voted to establish a constituent assembly to rewrite the constitution. The people of Chile are finally having their voices heard through their votes. Although Chile faces important human rights challenges related to prison conditions, accountability for past abuses, and protecting the rights of women; indigenous people; lesbian, gay, bisexual, and transgender people; migrants; and refugees; after the journey of Atacama, this seems like a beginning worth celebrating.

“Today,” says Rodriquez, “Chileans from all walks of life have united to fight against the latest incarnation of capitalism: neoliberalism. Will they succeed and show the rest of the world?”

Atacama is an important witness to history, an homage to the people of Chile, Peru, Spain, and all oppressed citizens anywhere in the world.