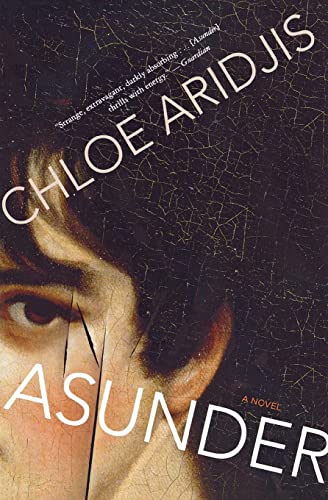 A book doesn’t need action in order to be dramatic as proven by this deceptively quiet second novel by Chloe Aridjis.

Asunder is a spooky story about drama that occurs in the heart and the mind amid weirdness—weird thoughts, dreams, gestures, personalities, hobbies, lifestyles, situations—cloaked in ordinariness.

The story’s narrator, Marie, is a strong-voiced, intelligent protagonist working as a guard in the staid British National Gallery. Despite the museum’s facade, however, it is roiling with life, all within seemingly inanimate things and people.

Being thus a cerebral tale, Asunder offers no obvious plotline. The book explores a woman’s transition from complacency to hunger, needing to break free and explore—experience—grow.

Marie gets the guard job because of her capacity to handle “acedia,” i.e., apathy and boredom. It “plagues the novice much more than the experienced solitary; unlike some of the new guards, I do not suffer from boredom or listlessness,” she explains. “Half of us have the right temperament, the other half don’t. Only time can distinguish us. Yet museum acedia isn’t triggered by a crisis of faith or the shifting angle of the sun and, what’s more, my profession is actually suited to those afflicted by it, perfect for individuals who are unconcerned with their position in the world and have fallen prey to a relatively permanent mental or physical sloth. The museum provides an activity for which we are paid to do little more than stand or sit for hours contemplating immobile images and mobile figures.”

Which creates fertile ground for the imagination. As Marie studies the passing public, and her colleagues, and the museum’s holdings and architecture, she reflects back on history and extrapolates from it to her life and into fantasy. A recurring topic is a true event from 1914, when a misguided suffragette took a meat cleaver to Velázquez’s nude portrait of Venus.

Marie also contemplates minutiae, such as paint cracks in the artworks, and uses them as launch points into deep thoughts and questions.

Then she goes home to express herself by constructing miniature dioramas.

But slowly the tentacles of desire creep into her . . . desire to go somewhere, do something, interact with old and new acquaintances in different ways. She starts to speculate about other worlds and feel herself stifled. In other words, acedia catches her while she’s looking the other way.

Ms. Aridjis presents Marie’s subtle changes through lucid yet sometimes dreamy writing. Her observations often have a startling zing. At the same time, she uses much shading and implication that encourage the reader to think between the lines.

Overall, she presents a study in grayness and halftones, never using the extremes of black and white or bold color. The story tiptoes near the edges of violence and depression without going into them, but neither touching joy. It is full of shadows and symbolism one can’t quite put a finger on.

So it’s almost surprising when Marie changes from watcher to actor and tears her world asunder. Whether she has made a colossal mistake or broken free to a better life is a question that lingers in the reader’s mind like a strong flavor on the tongue.